Phnom Penh, Laos -- Tibetan spiritual leader the Dalai Lama is still not welcome in Cambodia because of China's strong views on the subject, a senior Cambodian religious official said Tuesday. 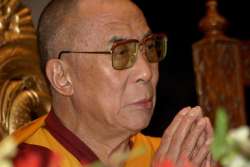 Speaking at the opening of a Japanese-donated pagoda on the outskirts of the capital, Religion Ministry secretary Chhorn Iem said the ban that excluded the Dalai Lama from the World Buddhism Conference in 2002 still stood because China's stance had not altered.

'We could not welcome him here even if he asked because Cambodia must implement the government's policy,' Iem said. 'Cambodia follows the One China Policy.'

He said the Dalai Lama, who lives in exile in India, had not filed an application to come to Cambodia since the policy was made clear.

However he said he could not predict the future, and Cambodia remained hopeful that someday political obstacles would no longer stand in the way of a visit by one of the world's most venerable Buddhists.

'I am not sure of what lies in the future. I cannot predict government policy in the future,' he said. However that policy is likely to be dependent on Beijing.

Cambodia's population is 95 percent Buddhist and Buddhism is the state religion.

China is one of Cambodia's top five donors and a powerful trade partner and investor, and although it has imposed few public strings on the vast sums of money it pumps into the country, Cambodian Prime Minister Hun Sen has repeatedly made it clear that Cambodia firmly supports the One China Policy.