Phnom Penh, Cambodia -- The great Cambodian (Khmer) kings, who ruled from the 9th century to the 13th century, regarded themselves as Devaraja. They fashioned temples out of stones with great care and devotion. 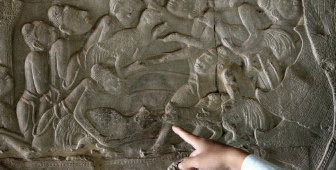 << In the Angkor Wat temple: Bas relief of a cockfight. Photo: AFP

These were places of worship. They trusted the work to master-craftsmen who painstakingly carried out the design ordered by the king, his ministers and the priests. The walls of the temples were richly embellished by panels of bas-relief.

A bas-relief is a form of sculpture or carving in which the figures project slightly from the background. These figures are used to represent various scenes, objects, animals or men. This type of architecture has developed over the centuries and the Khmers (people of Cambodian origin) specialised it to demonstrate their devotion by depicting religious scenes and objects as well as leave a record of history. The king’s battle achievements found a pride of place in the bas-relief.

The earlier Khmer kings were Hindus but later on they became Buddhists with the spread of Buddhism in Cambodia and other South East Asian countries. The apsaras with rich decoration, including double anklets, elaborate decorations on the head and jewellery round their necks smile divinely. Some of the panels are damaged due to natural causes and efforts are made to restore these. Since some of the bas-relief figures are not clear, oil is applied to clear the dirt and clean the surface to make it easy to view intricate carved figures and scenes. To understand the panels better, a note is put up detailing the scene and the characters. You have to see these panels in natural light as there are no special-effect lights to highlight the bas-relief figures.

The renovated Angkor Wat temple is famous for its six galleries stretching to 800 metres around the inner walls of the temple. A few illustrative examples: A scene depicts a procession, another one a battle, another one has a guru teaching his disciples. Animals are depicted too. Boating was a favourite pastime of the Khmers, which is shown in another bas-relief with rowers in a boat ferrying noblemen. An interesting bas-relief panel shows an ordinary market scene, animal slaughter, fighting dogs, people carrying food in baskets and so on. In some panels, Chinese characters are depicted, proving that there was a trade and commerce connection.