Phnom Penh, Cambodia -- Cambodian Buddhist monks from the ethnic minority Kampuchea Krom clashed with riot police in the capital Monday after they were refused permission to deliver a petition to the Vietnamese embassy. 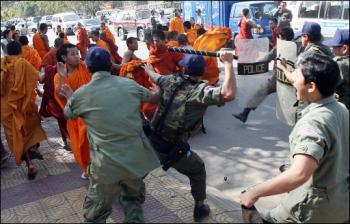 Around 50 monks in saffron robes arrived at the embassy mid-morning but were refused entry, according to one, and staged a peaceful sit-in outside the embassy for around an hour.

However things turned violent just as monks appeared to be complying with requests by Cambodian police to leave and suddenly turned and began throwing bottles and rocks at police before fleeing down one of the city's main streets.

Police said no arrests were made and there were only minor injuries on both sides.

"The monks only wanted to deliver a petition and the police behaved badly to them so they threw things," investigator for local human rights group Licadho, An Sam Ath, claimed.

"It is a great shame that the Cambodian government criticized Burma for attacking monks and then does the same thing to its own monks," he added, referring to bloody pro-democracy rallies in Burma's capital Rangoon in September.

Sam Ath said the monks' petition included a demand for the release of Tim Sakhorn, a Kampuchea Krom monk jailed in neighbouring Vietnam after being defrocked in Cambodia.

Human rights groups decried Sakhorn's deportation and subsequent arrest, but the Cambodian government says he requested repatriation to Vietnam after he was defrocked for alleged sexual misdemeanors and abusing his position at his south-western provincial pagoda.

Police at the scene who declined to be named claimed the monks had orchestrated an attack and had not been provoked.

"Look around: do you see any rocks at the embassy? They brought things with them to throw at us. We don't want trouble with monks. We are Buddhists too. They are cruel to do this," one officer said.

Interior Ministry spokesman Khieu Sopheak declined comment on the rally. Government spokesman Khieu Kanharith said he was outside the capital and had no information on the events.

The Kampuchea Krom are ethnic Cambodians from the Mekong delta region which was ceded to Vietnam by France during negotiations for independence.

Human rights groups have alleged they suffer abuses and suppression at the hands of the Vietnamese government - charges Vietnam denies.

The pro-Vietnam Cambodian government has also scoffed at allegations it targets Kampuchea Krom, pointing out a number of highly positioned monks from that ethnic minority who operate freely.