With Bold Determination and Strong Convictions, A Monk Develops Cambodia

Phnom Penh, Cambodia -- The sun has just risen at Wat Nokorbachey, a Buddhist temple in rural northeastern Cambodia. I’m standing near the ruins of a temple building and the early morning mist creeps over the tumbled stones and statues creating a mystical sensation. I’ve come here today to meet with the Venerable Thorn Vandong, a monk who runs the faith inspired organization Buddhism and Society Development Association (BSDA). 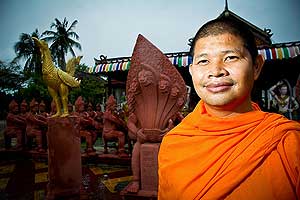 Throughout Cambodia’s history, Buddhist temples were a central fixture of daily life. Temples were more than just places to make offerings, gather at holidays, and to seek the guidance of monks. They offered a range of services to the community including classes for children, shelter to the poor, and basic medical services. But owing to Cambodia’s recent history – the takeover of the country by the Communist Khmer Rouge Regime in the mid 1970s and the regime’s subsequent banning of religious institutions – many temples were either destroyed or fell into disrepair.

Today, according to government statistics, Cambodia is home to just over 4,000 temples. Unclear, though, is the extent to which the monks at these temples are engaging with the surrounding communities. While historically, temples worked within their communities with little outside assistance, the BSDA model of basing an NGO at the temple, or pagoda, suggests this method of community engagement may be creating a new trend.

Our organization, the World Faiths Development Dialogue, is interested in not only what the monks at temples are doing, but also what their motivations are, where they get support (material and financial), what their knowledge is on certain topics like health and education, what they see as the critical development challenges facing Cambodia, and their openness to engaging in projects with the support of local or international organizations. The quest to get answers to at least some of these questions is what brings me here to my meeting with the Venerable Vandong, who I have heard through his NGO, is thinking about some of these questions. For now though, my immediate goal is to try to get a better sense of what BSDA’s operations entail, and more importantly, to learn what motivates and inspires Vandong’s work.

BSDA was established here in Kampong Cham Province in 2005 by a group of seven monks, including Vandong. Vandong serves as Executive Director and his staff comprises a mix of monks and laypersons totaling roughly 46 individuals.

“I am from a poor family,” explains Vandong. “I was lucky enough to become a monk and learn some English and it’s then that I thought back on my life and realized I am a citizen, I have to help the community.” The picture that has begun to emerge during the WFDD’s research and one that comes into sharper focus during my conversation with Vandong is that the success of local faith inspired organizations – measured here by the degree of engagement with communities and strength of programming – is directly correlated to the leadership’s vision. Vandong’s persistent energy and enthusiasm, his knack for addressing creative issues, and his ability to attract and retain valued staff have made BSDA into one of the leading Buddhist NGOs in the country.

Indeed, Vandong’s vision to address the needs of the poorest in society is reflected in the diversity of the organization’s programming. BSDA is one of only a few Buddhist NGOs in the country to offer such a variety of programs: staff talk to communities about the dangers of using drugs and help develop the capacity of community members to staff special centers where current and recovering drug addicts can seek help. The organization also educates local communities about prevention of and stigmas associated with HIV/AIDS. Formal education programs put monks and layperson volunteers in the public schools where they talk with classes about HIV/AIDS, violence prevention, drug abuse, traffic laws, and immigration. Vandong has placed particular emphasis on teaching students practical life skills like farming and fishing, a practice he says encourages parents to send their children to school. “Because people in the rural areas are poor, they think sending their children to school to learn conventional topics like reading and writing is not practical when they could be home supporting the family,” says Vandong. “But when they see we are also teaching them livelihood skills, then they are happy to let their children go and study.”

Informal educational programs are based around the operation of a vocational training center where students learn computer skills (the computers were donated by the Church of Latter Day Saints), study foreign languages like English, Chinese, Japanese, and Korean, and learn to sew.

“The chance for any child to get a basic level of education will have a positive impact on society,” says Vandong. “Many bad things can happen when people are not educated. If we look to the Pol Pot regime, we killed together because of lack of education.”

Some five miles from where our conversation is taking place, orphans and former street children are putting their hospitality training to the test, preparing for the lunch hour at BSDA’s latest project, Café Smile, a restaurant serving up a mix of Khmer and Western dishes.

I ask Vandong what he sees as the biggest challenge facing Buddhist NGOs in Cambodia. “Leadership,” he replies. “Leaders need to work hard to fundraise and motivate the society to be involved. It’s very important that a leader be able to motivate the society. Donors give us money because they say they trust us.” He notes three other Buddhist NGOs were at one point operating in the province, but blames their demise on the lack of good leadership and strong vision exerted by the heads of the organizations.

I also find quite interesting Vandong’s assertion that one of the more unconventional challenges to BSDA’s operational capacity is getting the volunteer monks to the project sites. “Monks cannot drive a motorbike or a car, so there needs to be someone to take the monk and drop them off.”

Interestingly, although there have been many opportunities to address the subject during our wide ranging discussion, mention of how faith inspires and motivates Vandong’s work does not occur until nearly the end of our conversation.

“Our society needs to change. We are now in the era of the computer. Things are not like they were in the past when people came to the temple to listen to the Dhamma. People don’t go to the temple because things there are not important in their lives. That realization that we have to change attitudes, that we have to preserve our culture but still keep up with the developed world, was part of the reason I helped found this organization. I want to connect modern society and Buddhist culture to make them closer than before. If people make Buddhist culture part of their lives, then the modern society will be free of violence, free of killing, free of stealing, free of sexual misconduct, and free of lying. That’s my goal and my vision for the future.”