Hanoi, Vietnam -- The Vesak Day, which fell on May 16, 2011, was celebrated throughout the country by Buddhists with various activities and events. 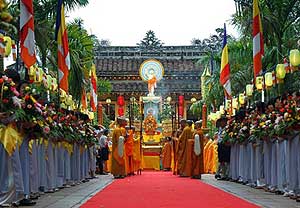 Commonly known as "Buddha's Birthday", Vesak - which actually encompasses the birth, enlightenment, and passing away of the Buddha - is one of the most important religious festivals in Vietnam.

In HCM City, thousands of people joined the festival at pagodas. The festival held at the Quang Duc monastery had the presence of Prime Minister Nguyen Tan Dung’s wife (black).

After the monk ended his prayer, attendants released balloons to wish for the world’s peace.

The monastery was decorated by beautiful flower garlands. More than 8,000 Buddhists flocked to Vinh Nghiem Pagoda to attend the Vesak Day.

The Viet Nam Quoc Tu pagoda in District 10 was also very crowded. Saigonees flocked to the road at night to celebrate the Vesak Day.

Some youngsters drew the Buddhist flags on their faces. Some paraded the streets by bicycles, decorated with flags and flowers. Kids were also enthusiastic to the festival.

In Hanoi Vesak Day was held at the Vietnam-Russian Friendship Cultural Palace in the morning of May 17.

From the early morning, flower-decorated vehicles from districts arrived at the palace. At 9 am, vehicles paraded through the rostrum.

Senior monks from the Vietnam Buddhist Shangha performed the Buddha bathing rituals, which had the attendance of Deputy Prime Minister, Pham Gia Khiem and Hanoi officials.

Attendants prayed for the country’s peace and prosperity. Venerable monk Thich Bao Nghiem explained the meaning of the Vesak Day 2011.

In Hue city Vesak Day festival was organized at the Dieu De and Tu Dam pagodas on May 16, to pray for the nation’s prosperity and peace.

The ceremony took place with the participation of Venerable monk Thich Duc Phuong, vice chief of the Vietnam Buddhist Shangha and senior monks.

The Buddha was paraded from the Dieu De to Tu Dam pagoda. Before the parade, the Buddha bathing ritual was performed at the Dieu De pagoda.