Exploring the serene centre of Buddhism

Bac Ninh, Vietnam -- On a hot summer day, it took Nguyet Anh an hour by motorbike to get to the Dau and But Thap pagodas from Ha Noi. The destination of this newly graduated journalism student from Ha Noi Social Science and Humanities University and her friends was located in the northern province of Bac Ninh. 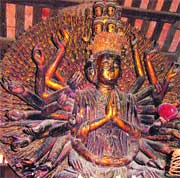 << The But Thap Pagoda features a unique wooden lacquered statue, dating from 1656, of the Mercy Goddess with a thousand eyes and a thousand hands.In front of the tower is a stone sheep brought by Monk Vinitaruci from India, who is known as the founder of Zen Buddhism in 580.

These two relics of Thuan Thanh District, 30km from Ha Noi's centre, are the most visited sites of the six pagodas and traditional craft villages of the province.

The Dau Pagoda, covering 15,000sq.m area in Thanh Khuong Commune, is a well-known ancient pagoda. It originated as the first Buddhist centre in Viet Nam in the third century.

More than 2,000 years ago, eminent monks from India came by sea to spread Buddhism to Viet Nam. The pagoda was built in AD187, finished in 226 and named Dau (land of mulberry cultivation) in the no longer functional Luy Lau Citadel.

The pagoda was rebuilt in 1313 with a design by Mac Dinh Chi, a mandarin in the Tran dynasty. Today the pagoda maintains its 14th century architecture with restored roof, timber rafters and beams.

The Dau Pagoda's 14th century architecture is typical of Viet Nam during that period. With four parallel buildings and the main chamber set in the centre, there are two corridors along the side that link the front and back of the house.

"It's the oldest pagoda in Viet Nam, a landmark of the beginnings of Buddhism in this country. The pagoda is the biggest centre of Viet Nam's main religion," said Nguyen Thi Mung, 63, an official of the historical relic managing board.

"The pagoda, most recently restored nine years ago, retains acient objects from some 1,000 years ago," she said.

The pagoda, located in the centre of rice and mulberry farms, was built for the bumper harvesters to have a place of worship.

A tower built behind the front house in 1373 initially had nine storeys before time and weather took their toll. The tower is now a three-storey vestige of the former structure.

Built by clay bricks with the mortar of molasses and slaked lime, it is still a long-standing symbol of the pagoda. The 17m high structure features a bronze bell cast from 1793 and a plaque from 1817 with four archways.

The centre back of main building has 2m high lacquered wooden statues of the Cloud Goddess and the Monk Vinitaruci.

The pagoda is home to a large collection of the 14th century-made arhat statues.

"It's my first visit to this pagoda and it was interesting to see the architecture and long history of it," said the 23-year-old Nguyet Anh.

"I love the peaceful feeling of this rural area after an hour motorbike drive from the crowded Ha Noi centre," she said.

The Dau pagoda was only the first stop for Nguyet Anh and her friends.

Following the Dau Pagoda, the friends took a 3km drive to visit the But Thap Pagoda in Dinh To Commune.

This second biggest pagoda in Thuan Thanh District still maintains most of its original architecture.

The pagoda faces south – an intelligent and enlightened direction according to the Buddhism tenet – with a complex of eight parallel buildings and two corridors.

All buildings are laid on a 100m axis, with an eight-roof bell tower, and represents all living beings.

The But Thap Pagoda was settled between 1258-1278, but then ruined until the queen mother, Trinh Thi Ngoc Truc, restored it in 1647.

The 16,000sq.m pagoda features a unique wooden lacquered statue of the 1656-made Mercy Goddess with thousand eyes and thousand hands, and 51 stone carvings.

The statue is a skilful example of Vietnamese crafts in the 17th century. It is 3.7m high and 2.1m wide and represents the seated Mercy Goddess meditating on a lotus base.

The Mercy Goddess statue has 11 heads, 42 big and 952 short arms; the longest arm is 2m, while the biggest head carries a 30cm lotus.

"It's the signature sculpture of Buddha in Viet Nam. Its hands depict a figure of Buddhism practice, while each hand has an eye. Thousands of arms and eyes illustrate the Buddhism doctrine that the Buddha covers the universe and gives help to every one," Tran Van Can, a novice at the pagoda, explained.

The 36-year-old novice added the pagoda is home of over 70 wooden statues of arhats with different gesture and facial expressions.

A small stone bridge with 13 engravings in the centre of the pagoda shows the way to Nirvana.

Behind the bridge is a house with an octagonal nine-storey wooden tower – a symbol of different steps to salvation in Buddhism.

The most impressive architecture of the pagoda is a big pen brush-shaped Bao Nghiem tower in the back yard.

Can said the tower was originally built by the Zen Buddhist Huyen Quang in 1297 with nine storeys in the shape of a lotus. However, the tower was resettled in the 17th century with five storeys.

The 13.5m high tower has four 2m wide hexagonal parts at the top, while the base is larger with 13 stone carvings of dragons, animals and flowers.

"I was amazed by the stone tower. I pray for luck and happiness whenever I visit a pagoda," Nguyet Anh said.