QUANG NINH, Vietnam -- The Yen Tu Pagoda Spring Festival has opened in the northern coastal province of Quang Ninh on the tenth day of the first lunar month, in the presence of Vice State President Nguyen Thi Doan, according to Vietnam news agency. 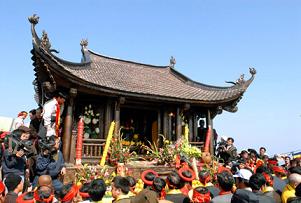 << Yen Tu Pagoda is the center of Buddhism in Vietnam

Buddhist dignitaries, monks, nuns, followers and visitors joined in a procession and a ceremony to offer incense to King Tran Nhan Tong, who reigned over the country from 1279 to 1293 and then left the throne to devote his life to Buddhism.

According to the provincial Party Committee's Secretary Nguyen Van Long the locality made careful preparations to serve pilgrims to the festival.

The area's beautiful natural landscape and awe-inspiring scenery, along with surrounding ancient pagodas and hermitages, are said to have been the reason that King Tran Nhan Tong passed the throne to his son so that he could devote his life living as a Buddhist monk at Yen Tu mountain.

Whilst there, he founded the Truc Lam meditation sect, which has led to Yen Tu being recognised as the country's leading centre for Buddhism.