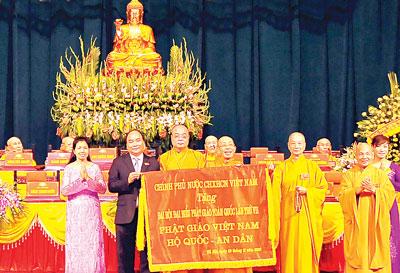 This year’s Congress was chaired by Most Venerable Thich Pho Tue, Patriarch of the Vietnam Buddhist Sangha’s Patronage Council.

The Congress was attended by Deputy Prime Minister Nguyen Xuan Phuc, President of the Vietnam Fatherland Front (VFF) Huynh Dam, Head of the Party Central Committee’s Commission for Mass Mobilization, Ha Thi Khiet, along with representatives from different ministries and sectors and 1,000 Buddhist followers across the country.

Addressing the opening ceremony, Most Venerable Thich Chon Thien, Vice Chairman and Secretary General of the Vietnam Buddhist Sangha’s (VBS) Executive Council highlighted the Congress as a major step towards the development of VBS through each period.

The Congress reviewed activities over the years such as restoring pagodas and towers, expanding Buddhist representative boards and establishing the Khmer Nam Tong (Theravada) Buddhist Institute in the Mekong Delta City of Can Tho.

On behalf of the Party and government, Dep PM Phuc presents the Congress with a laudatory banner embroidered with the words ‘Vietnam Buddhism-protecting the nation and solace for people’ (Photo: Tran Luu)
The VBS also organized seminars and festivals to mark the United Nations Day of Vesak (UNVD) and the 1000th anniversary of Thang Long-Hanoi, visited overseas Buddhist followers and launched charitable activities.

In his speech, Most Venerable Thich Chon Thien also said that the Congress will review the 2007-2012 operational period, adopt the 2012-2017 working plan, pass the 5th revision to the Sangha’s Charter, honor outstanding members of the Patronage Council and elect a new Executive Council for the seventh term.

Reviewing the work of the Sangha during the period 2007-2012, he said that the Sangha has established its chapters in 58 out of 63 cities and provinces nationwide, with eight new additional provinces.

The Sangha has carried out many humanitarian activities, including organizing classes for disadvantaged children, building homes for the elderly and other humanitarian services. It has raised thousands of billions of dongs over the past five years.

Speaking at the event, Deputy PM Phuc said that the Congress plays an important role in the spiritual life and beliefs of Buddhist followers at home and abroad.

With 2,000 years of tradition, Vietnamese Buddhism has become a religion closely imbued with the national tradition of struggle for peace and people’s happiness and the Buddhist Sangha has made great contributions to national construction and protection, he affirmed.

He expressed his hope that the Sangha will continue to live on in the hearts and minds of the Vietnamese people, and remain an important link for overseas Buddhist followers who want to contribute to building and developing the country.

In his speech, VFF President Huynh Dam praised the VBS for bringing into full play its role as a VFF member and for establishing international relations to raise its status.

He said he hopes with the spirit of patriotism and support from the State and the VFF, the VBS will continue to make greater contributions to the process of national construction and defense for the goal of a stronger nation and for all to live in an equal, democratic and civilized society.

The event is scheduled to end on the afternoon of November 24.