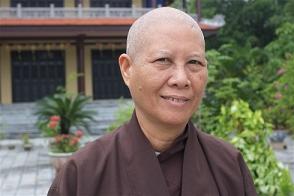 << Photo: Phuong Tran/IRIN
Not your typical disaster worker, but one nevertheless

Buddhist temples’ (or any religious organization’s) contribution to disaster relief is still under-studied by international donors and NGOs working on disaster response, despite their growing role in a number of places, says Ian Wilderspin, a technical specialist on disaster risk management for the UN Development Programme (UNDP) in Hanoi.

However, Bui Viet Hien, a UNDP programme analyst, co-authored a 2011 study in collaboration with the Ministry of Sciences and Technology on the role of informal organizations in boosting community resilience to flooding in a district of the coastal Binh Dinh Province in south-central Vietnam.

Groups identified in the study included, among others, business leaders in the rice industry; boat owners who lived closest to the pier and provided emergency transportation during flood seasons; and dyke protection brigades nominated by village elders to supervise dykes during rainy seasons. The study broke down each group’s contribution to boosting resilience, concluding that people in the above three groups had the most impact on their villages’ ability to get through disasters.

Eric Debert, a programme manager with international NGO CARE in Vietnam, said though religious groups are not targeted directly in CARE’s work with communities on disaster risk reduction, they may be represented in other community associations and groups CARE consults.

Nevertheless, it could be a “gap”, he noted. Since 2006 CARE has coordinated the Joint Advocacy Network Initiative (JANI) funded by European Union aid body ECHO.

“They [Buddhist temples] have good intentions, but little strategy,” said Nguyen Huu Thang, the vice-director of social welfare and disaster for the Vietnam Red Cross (one of two groups nationwide authorized to receive disaster relief donations) which has collaborated with Buddhist temples organizing relief trips. Temples’ lack of formal training in humanitarian response can lead to “confusion or chaos” if relief groups deliver goods haphazardly without coordinating with local officials, said Thang.

But the leader of Quan Dinh temple on the outskirts of Hanoi, who goes by her Buddhist `dharma’ name (given during an initiation ceremony), Sister Peaceful Light, told IRIN the temple always goes through an official structure, whether it is Vietnam Red Cross or provincial authorities.

Pagoda leaders in or close to disaster-stricken areas often meet and guide arriving groups on hikes or by canoe to provincial authorities, who then direct them to villages most in need.

In a country where more than half the population declares itself Buddhist, the network is wide - some 25,000 temples staffed with monks or nuns nationwide as of five years ago - Vietnam’s Buddhist Association reported to international media.

But the count then, and now, is only approximate. “Not all temples are registered with us. Some villages put joss sticks in an urn with rice and have a nun that visits occasionally. Is that a temple? Perhaps, but not known to us,” said an association staff member.

“Why do you need to know how much we gave? Is it not enough that we did?” asked the nun overseeing one of the most well-known Buddhist pagodas in the central city of Hue, Tay Linh temple, who goes by the name of Sister True Compassion.

Buddhist temples file annual reports with the national Vietnamese Buddhist Association which lists donation amounts and how the money was spent: Surviving families of canoes which sank; children in a leper colony; cancer patient’s home visit. And in late 2011 when storms battered the southern tip of Vietnam, killing an estimated 85 and forcing another 13,000 families from their homes, Tay Linh temple’s disaster relief activities filled almost an entire page.

In 2011, the temple’s charity board, which Sister True Compassion heads alongside her position as vice-director of the regional charity board representing all Buddhist temples in Hue, calculated it gave some US$24,000 to communities hit by disaster.

Not an uncommon response, noted local NGO Vietnam Asia Pacific Economic Centre, which published a study in 2011, with support from Asia Foundation, on philanthropic giving in Vietnam. The study noted that while in recent decades there has been “substantial individual giving... to alleviate the suffering of others particularly in times of disaster,” there has not been “systematic research or reports on giving patterns”.

Based on interviews with 200 households and 100 businesses nationwide, the NGO learned that “informal channels” - including pagodas, churches and community groups - received most charitable giving, while “official channels”- corporate organizations and funds for the poor - received but a fraction (27 percent in urban areas, 9.4 percent in rural ones).

“We do not work like formal organizations. Please do not call me a leader of anything,” said Sister True Compassion. “We are only trying to alleviate suffering and build compassion. That is all.”