Hanoi, Vietnam -- Much of Viet Nam’s most famous, traditional and valued cultural heritage has been provided or inspired by Buddhism, a religion which has for centuries been deeply embedded in the national psyche. 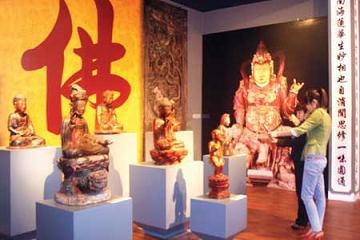 << Visitors contemplate Buddhist statues on display in the Ha Noi-based National Museum of History. The exhibition will last until August this year.

An extensive exhibition at the National Museum of History in Ha Noi is currently presenting and celebrating many varied examples of Buddhist culture which offer a reflection of the county’s development for over a thousand years.

Titled Vietnamese Buddhist Culture Heritage, the show introduces many valuable physical objects such as pagodas, towers, worshipping statues and paintings alongside examples of intangible heritage such as ceremonies, music and ethics.

With common cultural themes including humanity, humility and harmony, Buddhist heritage can be considered beautiful works of art, according to Nguyen Van Cuong, the museum’s director.

“Vietnamese Buddhism has left a rich and diverse history of material and spiritual cultural heritage throughout the country,” he said. “Through nearly 200 objects dating from the first to the 20th century, just a small selection in itself, we desire to introduce some general features and unique values of Buddhist heritage to the public and to contribute to efforts to preserve and raise awareness of Vietnamese culture.”

One of the most remarkable exhibits is a Canh Thinh bronze drum (dated from 1800), which was recently certified by the Prime Minister as one of Viet Nam’s National Treasures. It was discovered at Nanh Pagoda in the capital’s Ninh Hiep Commune before being moved to the museum for display.

The artefacts have been arranged according to the different time periods that they belong to. It is believed that Buddhism spread directly from India to Viet Nam via a sea route around 2,000 years ago. The Luy Lau region, which now belongs to Bac Ninh Province in the north, soon became a significant Buddhist centre. Many important vestiges of the religion have been found in the region, including notable discoveries at the pagodas of Phat Tich and Dau which are now being exhibited. 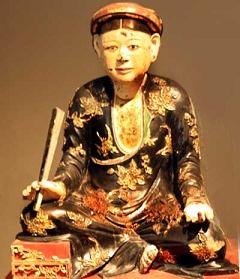 Items created in the first ten centuries of Vietnamese Buddhism soon formed part of the Cham and Oc Eo cultures in central and southern Viet Nam, with unique sculptures and statues carved from gold, stone, sandstone and wood inspired by Indian arts.

The most prosperous period for Buddhism in the country arrived during the Ly and Tran dynasties (11-14th century) when it became the national religion, and this is reflected in the cultural artefacts remaining from that time, which begin to merge religious meanings with a more unique national identity.

Although Confucianism became the official ideology under the Le and Mac dynasties in the 15th and 16th centuries, and so Buddhist relics from this period aren’t as varied as in others, visitors can still see objects from this era that have been collected by museum staff. These include statues, lamp stands and incense burners marked with clear inscriptions and dedications.

In the past, many wealthy men ordered artisans to make worshipping objects to be donated to pagodas. As a mark of thanks for the donation, the name of every benefactor would be emblazoned on stone steles at the places of worship. The exhibition has interested historians by displaying statues bearing the names of female donors, which is a unique discovery according to Cuong.

The exhibition will run until the end of August at the museum, which can be found at 25 Tong Dan Street in Ha Noi.