DHARAMSHALA, Tibet (China) -- Tibetan spiritual leader His Holiness the Dalai Lama has on Tuesday expressed his sadness over the passing away of Vietnamese Patriarch Thich Tri Tinh. Thich Tri Tinh was the first Supreme Patriach. 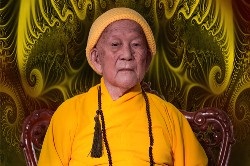 Dalai Lama also offered prayers for the Patriach and conveyed his condolences to the Patraich’s followers in Vietnam and elsewhere. Tinh died on March 28 at the age of 97.

In a letter to the National Vietnam Buddhist Sangha, His Holiness wrote, "The best way to pay tribute to him would be to do whatever we can to implement the Buddha's message of inner peace, non-violence and compassion in our own lives."

He made significant contributions to gathering Buddhist followers in and out of the country to jointly build a strong Vietnam Buddhist Sangha.

He was conferred with a number of noble distinctions of the Party and State, including the Ho Chi Minh Order, Independence Order (first class), and Great National Unity Order.