Hanoi, Vietnam -- More than 500 Buddhist antiquities, including artifacts rated as national treasures, are on display at the Museum of Buddhist Culture in the central city of Da Nang. 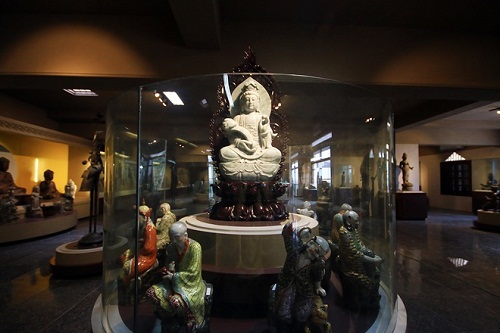 The museum, located in Quan The Am Temple in Ngu Hanh Son District, was licensed by the municipal government at the end of 2014. This is the first Buddhist Culture Museum in Vietnam.

The temple is preparing a big exhibition space to showcase about 700 antiques relating to Buddhism, which is scheduled to open on December 24.

In addition, many ancient Buddha statues have been donated from countries across the world for exhibition.

Huynh Dinh Quoc Thien, deputy director of the Da Nang Museum, said they accidentally discovered a "treasure-house" of about 500 objects, with more than 200 antiques at the Quan The Am Temple. The collection of Buddhist antiques preserved at the temple have great value. From the Buddha statues to bronze censers to objects of worship, they are all unique treasures.

Nguyen Dinh Chien, deputy director of the Vietnam National History Museum, said he was impressed at their rare and precious value.

He said that many of these antiques were national treasures. They included a statue made of precious white jade in the shape of a Bodhisattva holding a baby in her arms, and a set of eight Buddha statues, made of bronze in the 9th century.