Some came here for war, but India brought Buddhism here with message of peace: PM Modi in Vietnam

Narendra Modi invited all the monks to visit India - the land of Buddha - and especially to Varanasi "which I represent in the Indian Parliament." 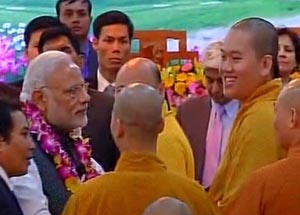 “World should walk on the path of peace that brings happiness and prosperity, while war only brings transient greatness,” the prime minister said.

“The advent of Buddhism from India to Vietnam and the monuments of Vietnam’s Hindu Cham temples stand testimony to these bonds,” Modi said.

He said the India-Vietnam ties were 2,000 years old. Modi emphasised that his visit to Vietnam – the first by an Indian premier in 15 years – was to “nurture a relationship between our two societies and nations.”

“These cultural bonds reflect themselves in many ways. Most prominently, in the connect between Buddhism and the monuments of the Hindu Cham civilization,” he said.

“Some people came here with the objective of war. We came here with a message of peace which has endured,” Modi said. Modi said Buddhism, which took the sea route, travelled to Vietnam in its purest form from India.

He invited all the monks to visit India – the land of Buddha – and especially to Varanasi “which I represent in the Indian Parliament.”

He said he is fortunate to visit the Pagoda temple after first President Rajendra Prasad in 1959.

The Quan Su Pagoda, also known as Ambassador’s pagoda, is said to have served emissaries that were sent from Champa and Laos to Vietnam in the past. The pagodas – a Buddhist heritage and popular toursit sites – are at the heart of Vietnamese Buddhism and are a precious treasure of Hanoi.

The pagoda is said to have served emissaries that were sent from Champa and Laos to Vietnam in the past. Earlier today, Modi visited Ho Chi Minh’s stilt house at the majestic presidential palace. He was accompanied by Premier Phuc and thanked him for his generous welcome.

“Earlier this morning, you made the special gesture of personally showing me Ho Chi Minh’s house… Thank you, Excellency, for extending me the privilege. Let me also congratulate the people of Vietnam on their national day that you celebrated yesterday,” he said.

The stilt house was the residence of Ho Chi Minh from 1958 until his death in 1969 and is located inside the majestic Presidential Palace in Hanoi.

Modi also congratulated the people of Vietnam on their national day on Friday and laid a wreath at the Monument of National Heroes and Martyrs of Vietnam located across the Ba Dinh Square, across the Ho Chi Minh Mausoleum.

“Homage to indomitable will of a leader. PM @narendramodi pays respects at the mausoleum of Ho Chi Minh. Beginning with the memory of Vietnam’s Martyrs. PM @narendramodi lays wreath at Monument of National Heroes & Martyrs,” Swarup said in a series of tweets.

Earlier today the prime minister was given a ceremonial welcome at the palace as he became the first Indian prime minister to visit the communist nation in 15 years.

“For people of my generation, Vietnam holds a special place in our hearts. The bravery of the Vietnamese people in gaining independence from colonial rule has been a true inspiration. And, your success in national reunification and commitment to nation building reflects the strength of character of your people,” Modi said.

He said India believed in sharing knowledge, experience and expertise with other developing countries.

“The Cuu Long Delta Rice Research Institute, is a prime example of the enormous impact of our cooperation. India helped set up the institute in the Mekong Delta, sending agricultural experts and training its faculty in India,” he added.
TOP