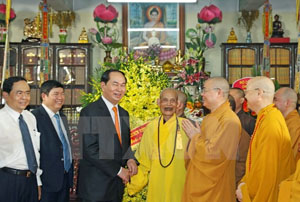 On behalf of the Party and the State, President Quang extended greetings to Most Venerable Thich Pho Tue and all Buddhist dignitaries, monks and nuns and followers in the country.

The President spoke highly of the practical and significant contributions the VBS and all monks, nuns and followers have made to the nation’s great unity, national defence and development over the past years.

He stressed that Buddhism has established a firm position in the country’s history since it was first introduced to Viet Nam nearly 2,000 years ago, thanks to its spirit of “safeguarding the country, bringing peace to the people”.

Building on its tradition, the VBS has encouraged monks, nuns and followers across the nation to lead an upright religious life, observe the Party’s policies and the State’s laws, and actively participate in patriotic emulation campaigns and charity activities, he said.

The President affirmed that the Party and the State continue to respect and protect the freedom of religion and belief for all people, and facilitate religious practice of religious people and dignitaries, including Buddhists.

He noted that the 8th National Buddhist Congress for the 2017-2022 will take place this year, when the VBS will review their work, set future orientations and elect the Patronage Council and the Executive Council for the new tenure.

In this spirit, President Quang expressed his hope that Most Venerable Thích Pho Tue will continue leading the VBS under the motto of “Religion – Nation – Socialism” while actively contributing to the nation building and development.

Viet Nam is now home to more than 12 million Buddhist followers and 50,000 Buddhist monks and nuns, who are practicing the religion in over 17,000 Buddhist places of worship.