The Fighting Monks of Vietnam

HANOI, Vietnam -- As a world-renowned Buddhist scholar, Vietnamese monk Thich Nhat Hanh has become almost synonymous with the words reconciliation and healing. Exiled by both North and South in the 1960s, he focused his concepts of mindfulness and "engaged Buddhism" into retreats for American veterans struggling to build inner peace from the ravages of the Vietnam War. 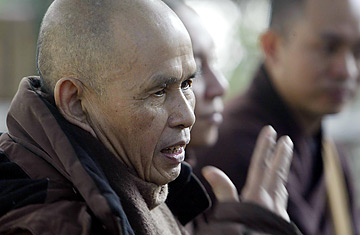 He's published more than 80 books, built monasteries in France and the U.S. and was nominated for a Nobel Peace Prize by Martin Luther King Jr., who said his anti-war stance was inspired by the Zen master's teachings.

One dedicated doctor keeps a nightly vigil in a violent section of the city. But how much longer will he and other physicians remain in an increasingly dangerous country?

Now, at age 80, Nhat Hanh has turned his attention to healing the wounds of war in his communist-run native land. But his mission faces opposition from a surprising front — fellow Vietnamese Buddhists. Last week, Nhat Hanh arrived in the former Saigon for a 10-week tour, his second in two years. His plans include a series of three-day Buddhist mass-chanting ceremonies, the first starting March 16, to pray for the dead on all sides of the Vietnam War, unprecedented "Grand Requiem" ceremonies that Nhat Hanh's followers hail as a leap forward in Communist-Buddhist relations.

But the banned Unified Buddhist Church of Vietnam sees Nhat Hanh's pilgrimage as betrayal, not breakthrough. The UBCV's two top officials, Thich Huyen Quang, and Thich Quang Do ("Thich" is an honorific held by most Vietnamese monks) have been under house arrest in their respective monasteries due to their pro-democracy stance and opposition to strict government control of religion, which was established after the communists won the war in 1975. A spokesman for the outlawed sect said he is "shocked" that Nhat Hanh is willing to work with his co-religionists' oppressors. "I believe Thich Nhat Hanh's trip is manipulated by the Hanoi government to hide its repression of the Unified Buddhist Church and create a false impression of religious freedom in Vietnam," said Vo Van Ai, a Paris-based spokesman for the UBCV.

About the Requiem plans, Ai said pointedly, "I think it is time to think about the living, not only the dead."

The controversy pits Vietnam's best-known Buddhists against each other. The Unified Buddhists' patriarch, 87-year-old Thich Huyen Quang, who lives in a monastery in central Vietnam, has been ailing recently, but his deputy, Thich Quang Do, 77, has been a high-profile dissident operating out a monastery in Ho Chi Minh City (formerly Saigon) and proponent of Buddhism free of state control. (An estimated 80% of Vietnam's 84 million people are Buddhist, but after the Vietnam war the Communist Party folded the religion's many sects into one state-controlled church.) Quang Do smuggled his messages to his supporters in Paris who then channel the word back to Vietnam. He has been nominated for the Nobel Peace Prize several times.

Despite the sequestration of the dissident Buddhists, Hanoi's communist leaders have been working hard to dispel the country's reputation for persecuting religion. After the U.S. in 2004 placed Vietnam on its list of "Countries of Particular Concern" for blocking religious freedom (North Korea, Iran, Saudi Arabia and China are all on the list), Hanoi passed a new law outlining ways for non-state religions to gain official approval. The next year, it allowed Nhat Hanh to return to Vietnam for the first time in 40 years. Late last year, Washington removed Vietnam from the religious-freedom blacklist.

The Unified Buddhists say the Communist Party's strategy is to promote Nhat Hanh's non-political teachings in order to sideline the religion's legitimate leaders, those who stayed during the war. But Nhat Hanh's followers say that he only wants to promote Buddhism among ordinary Vietnamese and point out that both of the banned sect's leaders refused to meet with Nhat Hanh during his first visit in 2005. Quang Do rejected overtures for a meeting and when Nhat Hanh led a delegation to the monastery where Huyen Quang is confined, the UBCV patriarch locked himself in his room and refused to come out. "We understand for sure that they are in a difficult position," Nhat Hanh's spokesman Phap An said of the UBCV leaders. "We just sat there outside and sang the songs to [Huyen Quang] to express our love."

Thich Nhat Hanh's followers say he has also has had to contend with communist obstruction. Originally, the Grand Requiem ceremonies were to be billed in Vietnamese as the "Grand Requiem for Praying Equally for All to Untie the Knots of Unjust Suffering." But Vietnamese officials objected, saying it was improper to "equally" pray for soldiers in the U.S.-backed South Vietnam army, not to mention American soldiers.

"The spirit of the Vietnamese people doesn't agree with the idea of praying for foreign imperialists coming to kill millions of Vietnamese," says Bui Huu Duoc, director of the government's Religious Affairs Committee for Buddhism. So Nhat Hanh agreed to change the name to simply "Grand Requiem For Praying," though his supporters say the spirit of the ceremony remains the same.

In fact, Vietnam's clash of Buddhist leaders reflects the country's new religious reality in which ordinary worshipers are enjoying unprecedented freedom. Still, even a hint of political activism is snuffed out. "As long as you play by the rules and are loyal to the regime, they'll leave you alone," says Carl Thayer, a professor and Vietnam expert at Australia's Defence Academy. And if religious leaders focus on fighting each other, the regime must be even more pleased.