Hanoi, Vietnam -- Buddhist monks, nuns and followers have been flocking to celebrations around the country to mark the 2551st birthday of Buddha. 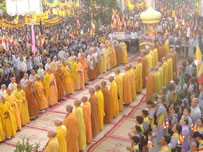 In Hanoi alone, close to 600 pagodas dotted around the capital have been holding celebrations since May 24, with municipal and district leaders holding meetings with Buddhist dignitaries to extend their greetings to Buddhists.

Buddhists in Hanoi's pagodas have also been hard at work organizing humanitarian activities to help the disadvantaged and sick while celebrating the event.

In Thua Thien-Hue province, the localities' leadership and the provincial Vietnam Fatherland Front Committee have also sent delegations to visit the Executive Board of the provincial Buddhist Sangha and pagodas to extend their own greetings.

On May 30, a delegation of the People's Committee, People's Council and Fatherland Front Committee of central Da Nang province visited the Executive Board of the Da Nang Buddhist Sangha to show support for the local Buddhist population.

Most Venerable Thich Giac Vien, acting Chairman of the Executive Board, expressed his gratitude to the city's authorities for their assistance and cooperation in allowing the committee to fulfil its tasks.