Thai Binh, Vietnam -- Over 30,000 visitors flocked to this year’s Autumn Festival at Keo Pagoda. The superstitious and skeptical alike couldn’t help but become caught up in the magical aura – Bui Quynh Hoa included. 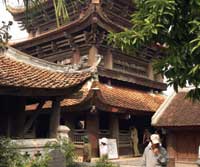 Legend has it that a humble fisherman in the 11th century achieved enlightenment as a Buddhist monk and could thereby fly through the air, walk on water and tame snakes and tigers.

Over 900 years later, residents of Thai Binh Province’s Vu Thu District still honour the Buddhist hero with a festival as mystical as the legend it recognises.

The flocks of visitors who come to witness the Autumn Festival, the province’s biggest cultural event of the year, have no trouble finding Keo Pagoda, located on the site where the Buddhist dignitary once had a 58,000sq.m pagoda built (before floods washed it away).

From the banks of the Hong (Red) River, Keo Pagoda rises above a flat, open plane, its wooden bell tower shaped like a lotus flower rising 11m above a sea of green rice plants.

The pagoda itself is said to be imbued with the mysterious power of Khong Lo: according to Nguyen Van Khanh, a caretaker of Keo Pagoda, people still speak of the pagoda’s strange history in hushed tones.

"Viet Nam has experienced war for many decades, but miraculously the pagoda has never been damaged by any arrow or bullet," Khanh whispered. "Furthermore, none of the pagoda’s valuable antiques have ever been stolen; nobody would dare. We can’t explain these things."

Perhaps the pagoda’s own mythical appeal plays a role in drawing so many visitors to Duy Nhat Village each year on the 13th, 14th and 15th days of the ninth lunar month. For those who don’t buy into the magic, though, the festival still offers insight into the unique cultural traditions of those who make their livings in this fertile delta.

The festival takes off on the 13th day of the lunar month, when 42 virgin boys are selected to carry the local deity’s palanquin in celebration of the 100th day after the anniversary of Khong Lo’s death.

In the afternoon, after a boat race, a satirical sorcery-reading contest is held in Gia Roi shrine – a crowd favourite among the festival’s events.

That night, light from the main shrine illuminates preparations for the next day’s procession. Accompanied by the beating of drums and instrumental music, prayers are offered until midnight.

On the second day of the festival, an incense-offering ritual in the morning celebrates the birthday of Khong Lo, and a procession led by two pairs of white and pink wooden horses follows.

Four people place a small boat on a stand, to represent Khong Lo’s early years as a fisherman. The gilded palanquin containing the worshipping tablet of the holy one is hoisted by 12 boys. Clad in purple, the chief official solemnly walks behind, and the ritual participants follow.

When the palanquin reaches the pond, the procession is welcomed by seven dancing wooden puppets.

In the afternoon, at Gia Roi shrine, the mua ech vo (frog-catching dance) ritual pays respect to the gods, while incense is offered to Buddha.

On day three, the boat-rowing dance is performed by 12 people in intricate costumes standing on land in two parallel lines, as though they were sitting in a boat. As one performer beats a small drum and another holds a wooden fish, the 12 performers "row" while flexing their legs and calling out in unison. As the crowd looks on, this performance ends the Keo Pagoda Festival.

While many attendees likely only visit Keo Pagoda for its two yearly festivals, local authorities and pagoda leaders are constantly dealing with the day-to-day upkeep of the Buddhist centre.

Keo Pagoda is home to a wealth of ancient relics, from intricately engraved wooden dragons to a collection of over 100 statues.

"The pagoda is especially famous for its aloe wood statue of Master Khong Lo and bronze statue of Tuyet Son, which are considered two of the best statues sculpted by Vietnamese artists," said the Venerable Thich Thanh Quang, Keo Pagoda’s abbot.

"The pagoda also has valuable antiques including a pair of candlesticks from the Mac Dynasty, potteryware and altars from the Le Dynasty, imperial boats and more, which are all as well preserved now as they were during the time of the Le Trung Hung Dynasty in 16th century," he added.

In order to keep these valuable statues looking their best, once every 12 years, Keo Village nominates one male ritual master and four assistants to perform the ceremony for the decoration of the sacred statue of Khong Lo. Those men, while keeping a vegetarian diet and wearing new clothes, are responsible for respectfully taking the statue out of the sanctuary and repainting it in vermilion.

This job must be done through the strictly defined steps of the ritual, and all of the assistants must swear to absolute secrecy about what they have seen while dressing the statue. The public can view the statue only on festival days.

The 17 structures that comprise the pagoda and its conjoining temple date back to the later Le era (16th-17th centuries), making renovation and conservation efforts constantly necessary. Hence, in 1998, the Ministry of Culture and Information (now the Ministry of Culture, Tourism and Sport) recognised Keo Pagoda as a historical and cultural relic and began pouring in funding.

District authorities, in collaboration with local residents, have led the planning of the yearly festival, contributing to increasing the number of domestic and foreign visitors to Keo Pagoda at this year’s Autumn Festival to about 10,000 people per day – double last year’s figures.

"More and more people are coming here, and it makes me so proud to live in this town where the pagoda is located," he said. "I hope that together with the support of the Government and the province, Keo Pagoda will remain an interesting tourist attraction and a source of pride for Vietnamese architects, Duy Nhat villagers and all of Thai Binh Province – as well as the whole country!"

If you go: How to get there

From Ha Noi, take Highway 1 to Nam Dinh Province, then turn left onto Highway 10. Go straight about 10km over Tan De Bridge to Vu Thu District, then turn right. Go about 10km along the Red River dike, and you will arrive at Keo Pagoda.