Hanoi, Vietnam -- Buddhism has the largest following in Vietnam with around 10 million devotees. The religion plays an important role in the spiritual life of the Vietnamese people. 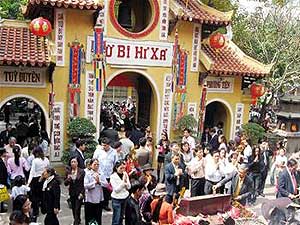 Many studies indicate that Buddhism entered southern Viet Nam by sea and northern Viet Nam by road. Monks and nuns aboard Indian merchant fleets were considered to be the first people bringing Buddhism to Viet Nam with simple practices such as worshiping Buddha, reciting the Buddhist scriptures, disease treatment, expel ing evil spirits and delivering dharma lectures to local inhabitants.

Buddhism’s characteristics have created a close connection with the country’s folk culture. Pagodas have not only become places of worship or religious activities but also kept the Vietnamese people’s traditional and spiritual culture as venues for folk festivities.

From the fifth to the tenth century, Viet Nam’s Buddhism was influenced by China’s Buddhism and experienced a robust stage of development in the following period.

Between the 16th century to the end of the 19th century, Buddhism became the national religion, with various pagodas being built and upgraded and many kings becoming Buddhists.

After 1954, due to the national division, Buddhism saw big changes in the northern and southern regions with many Buddhist organisations being established. The Unified Buddhist Church of Viet Nam was set up in 1964.

After a period of operation, a small number of members of the Unified Buddhist Church of Viet Nam separated themselves from the organisation and was influenced by negative tendencies. However, almost Buddhists have maintained their patriotic tradition, participating in the struggle for national salvation and reunification.

As a majority of monks, nuns and followers desired, in 1981, the Viet Nam Buddhist Sangha was set up on the basis of unifying the Unified Buddhist Church of Viet Nam and other Buddhist sects, becoming the sole representative for the Vietnamese Buddhism inside and outside the country.

Venerable Thich Thien Thong, Deputy head of the managing committee of the An Giang Provincial Buddhist Sangha, said thoughts of a part of young monks and nuns are running contrary to the Sangha’s motto.
“This is because they do not understand the concept of solidarity and concord with their in-depth mind, without respecting the Vietnamese Buddhism’s characteristics.”

Most Venerable Thich Thanh Tu, Vice President of the Executive Council of the Viet Nam Buddhist Sangha shared the same view. He said it is necessary to train young monks and nuns who are both talented and moral for the sustainable growth of the Sangha.

Bui Huu Duoc, Director of the Department for Buddhist Affairs of the Government Committee for Religious Affairs, affirmed Viet Nam’s consistent policy of respecting and creating favourable conditions for the Viet Nam Buddhist Sangha to develop and contribute to social development.

Buddhism is developing fast in all parts of Viet Nam along with five other religions, constituting a diversified religious life in the country. The custom to worship Buddha at home and go to pagodas on the first and fifteenth day of each lunar month has become a religious and cultural beauty of the Vietnamese people, creating a unique identity of the country.

The sixth Buddhist national congress will take place next week and the United Nations Day of Vesak is expected to be held in Viet Nam for the first time in May next year. Both are considered as the opportunities for all Buddhist followers inside and outside the country to show their solidarity, concord and patriotism.