HANOI, Vietnam -- Human Rights Watch called on communist Vietnam Thursday to lift any restrictions on the liberty of an activist Buddhist monk who disappeared on the day he was released from prison last week. 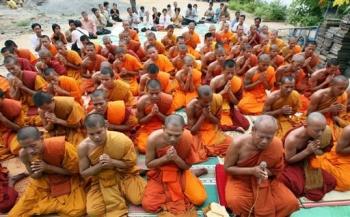 Tim Sakhorn, an activist for the Khmer Krom ethnic Cambodian minority of southern Vietnam, was freed Saturday, but his whereabouts were unknown since he was last seen together with government officials, the rights group said.

"While his release from prison is welcome, as a peaceful activist and human rights defender, Tim Sakhorn should never have been imprisoned in the first place," said Brad Adams, Asia director of the New York-based group.

The rights group said it feared Sakhorn may be under house arrest and police surveillance, like other dissident monks in Vietnam.

Vietnam-born Sakhorn, 40, had lived in Cambodia since 1978, when his family fled border fighting between Khmer Rouge and Vietnamese forces, and became a Cambodian citizen and, 17 years ago, a Buddhist monk.

He had sheltered Khmer Krom asylum seekers from Vietnam at his pagoda and was a member for the US-based Khmers Kampuchea Krom Federation, which campaigns for the minority's religious freedoms and land rights.

The region, home to about 10 million ethnic Cambodians, was made part of Vietnam during the French colonial reign but remains a source of tension between Hanoi and Khmer nationalists who want it returned to Cambodia.

On June 30 last year Cambodian authorities defrocked Sakhorn for "harming the solidarity" between Cambodia and Vietnam and arrested and deported him.

Vietnam jailed him in November for "undermining national unity."

Sakhorn was released on June 28 and, dressed in civilian clothes, escorted to his An Giang province birthplace, where officials reportedly offered him land and a house as an incentive to remain in Vietnam, HRW said.

However, hours later, according to villagers, government officials escorted Sakhorn away, reportedly to Ho Chi Minh City, said the group.

"He should be able to travel freely and to meet his friends and family members in private," Adams said. "And the Cambodian government should publicly confirm that he is free to return to Cambodia, where he is a citizen."