Hanoi, Vietnam -- Celebrations to mark Buddha’s 2553rd birthday – the most important event in the Buddhist calendar, have been celebrated at many pagodas in Hanoi over the past few days. 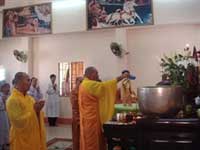 Many Buddhist monks and nuns from over 2,000 pagodas decorated their pagodas with flags, flowers and lanterns.

Most Venerable Thich Chieu Tue, vice secretary of the Hanoi Buddhist Sangha Chapter said that after the recent merger of Hanoi and Ha Tay Buddhist oganisations, many large-scale activities have been held to attract Buddhist followers from different pagodas around the city.

Apart from competitions and concerts to mark the event, the Hanoi Buddhist Sangha Chapter has for the first time organised a week of lectures for Buddhist followers at Mo Lao and Ba Da pagodas.

On May 10, it will present 300 gifts worth VND60 million to poor people and orphans, people with HIV at the Centre for the Elderly and Poor People in Ba Vi district, the Central Pediatric Hospital and Dong Da Hospital.

Monks and nuns have also conducted a number of charitable activities to help disadvantaged children and poor patients to strengthen national unity.

Representatives from the Buddhism Board in Tu Liem district has also donated VND4 million to the Red Cross, the Vietnamese Blind People’s Association, the National Fund for Vietnamese Children and the Fund for the Poor.
TOP