HANOI, Vietnam -- Communist Vietnam's sometimes edgy relationship with religious freedom is being tested in a dispute over a monastery inhabited by disciples of Thich Nhat Hanh, a renowned Zen master. 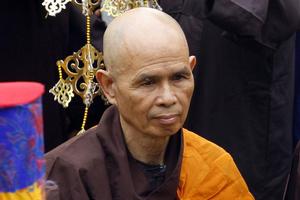 For four years, the Buddhist monks and nuns at Bat Nha monastery in central Vietnam have meditated and studied the teachings of the 82-year-old Vietnamese sage who is perhaps the world's best-known living Buddhist after Tibet's Dalai Lama. But lately, they are in a standoff that could test the patience of even the most enlightened.

First, local authorities cut off their power, water and telephones. Then, a mob descended on their compound with sledgehammers, smashing windows, damaging buildings and threatening occupants.

Communist authorities have ordered the 379 monks to leave. They say the standoff stems from disagreements between two Buddhist factions at the monastery. But Nhat Hanh's followers believe they are being punished because of Nhat Hanh's praise for the Dalai Lama and his call to broaden religious freedom in Vietnam.

The affair represents a remarkable turnaround from four years ago, when the France based Zen master returned to his native land after 39 years of exile. In 1966 he had been forced out of South Vietnam for criticising the Vietnam War. His return in 2005 made the front pages of state-owned newspapers, and he met the Prime Minister.

The abbot at Bat Nha, which belonged to the official Buddhist Church of Vietnam, invited Nhat Hanh's followers to train monks in their brand of Buddhism.

Many saw all this as evidence that the Communist government was easing restrictions on religious freedom.

Last October, the chairman of Vietnam's National Committee on Religious Affairs accused Plum Village, Nhat Hanh's monastery in southern France, of publishing false information about Vietnam on its website. He said that Nhat Hanh's followers should leave Bat Nha and stressed that Abbot Duc Nghi, the property's original owner, wanted them to go. An associate said the followers were surprised because the abbot had visited the monastery two or three times and seemed to respect Nhat Hanh.

However, Nhat Hanh's supporters say there has also been harassment.

ENGAGED IN THE STUDY OF BUDDHISM

IN THE MOMENT
The brand of "Engaged Buddhism" promoted by Thich Nhat Hanh (right) teaches people to live in the present moment, to listen carefully to others and to understand their points of view. Followers practise meditation and breathing techniques to keep them relaxed and in the here and now, not dwelling in the past or on negative emotions.

DO GOOD
Nhat Hanh's "Order of Interbeing" encourages followers to do works aimed at promoting peace and alleviating poverty.

"Do not utter words that can create discord and cause the community to break," is one of the Zen master's precepts. "Make every effort to reconcile and resolve all conflicts, however small."