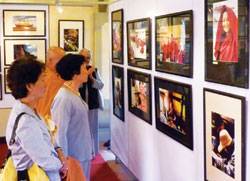 The week, lasting until December 5, is to celebrate the 1,000th birthday anniversary of Thang Long-Hanoi and the first national conference of the cultural sector of the Vietnam Buddhist Sangha.

One of the exhibition displays 40 panoramic photos of 1.5m x 3.2m made by Nguyen Thinh and Ngo Thuy Hong, introducing landscapes and cultural tangible heritage across the country.