HANOI, Vietnam -- One of the world's most influential Buddhist monks made a plea for religious freedom in Vietnam Monday after his followers were forced from two temples. 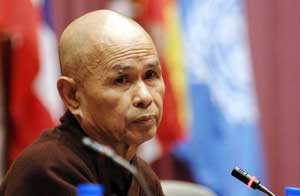 Devotees of French-based Zen master and peace activist Thich Nhat Hanh say they have gone underground in Vietnam since last month when they were driven from the Phuoc Hue temple where they sought refuge after an earlier eviction.

Nhat Hanh said "hired mobs" were used last September to force hundreds of the young monks and nuns from Bat Nha monastery in central Vietnam where they had meditated and lived peacefully for several years.

"All we want is to practise -- why can't we ?" he asked in his eight-page plea written in the form of a koan, a type of Zen riddle.

"Why is it that in other countries people can practise this tradition freely, and we can't ?"

Nhat Hanh, who was a confidant of slain US civil rights leader Martin Luther King, is based at the Plum Village monastery in France.

All religious activity in Vietnam remains under the control of the communist state, which says it always respects freedom of belief and religion. Authorities have denied driving out the Plum Village devotees and described the issue as an internal dispute among Buddhist factions.

He called the expulsion "an ugly stain on the history of Buddhism in Vietnam," where he said kings and politicians centuries ago followed a virtuous Buddhist path in contrast to officials caught up in corruption and other vices today.

Nhat Hanh asked whether communist officials were afraid that if his followers have mass support, it would be at the officials' expense.

Both the US embassy and the European Parliament have expressed concern over the expulsion.