Da Lat, Vietnam -- Tourists to the flower city of Da Lat are fond of the beauty of French-styled architecture of more than 2,000 villas, many of which nestle among the mountain pines. Huge numbers of pagodas located around the city presents tourists with a different oriental style of design. 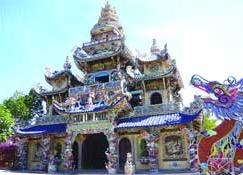 << Recycle and reuse: The main hall of the terra cotta in Linh Phuoc pagoda is covered in glass and ceramic tiles. — VNS Photos Van Dat

The friendly staff at my hotel suggested that I take a railway trip on an old locomotive to Trai Mat, around eight kilometres from the city, to visit the colourful Linh Phuoc Pagoda.

Unfortunately when I got to the station there were only a few backpackers who wanted to buy tickets and the train wouldn't operate with less than ten passengers. Instead of waiting, I rode my motorbike north to Trai Mat. The 30-minute ride took me through incredibly scenic mountain passes on the way to the pagoda.

The chilly wind of the Tay Nguyen (Central Highlands) city added to the adventure of visiting a sacred place of worship with its unique architecture.

The pagoda is not huge but its seven-storey tower decorated with pieces of terra cotta is eye-catching. Stepping into the tower, I met a monk standing next to the 4.3m tall Great Bell that weighs 8,500kg and was cast in 1999.

She said before visitors can climb the tower, they must strike the bell three times. Once this was done, I was able to climb the many stairs to the top and take in the amazing view.

Tourists are always advised to write their wishes on a piece of yellow paper, stick the piece of paper onto the bell and then chime the bell three times to send their prayers to Buddha. This is a sacred experience that should not be missed in the pagoda.

Monks in the pagoda said the tower was hallowed. Early last year, thousands of Buddhists followers and monks from around Da Lat gathered in front of it to see a halo of Buddha shining on its top.

Stepping out of Da Bao Tower, I was impressed with the painstaking work that had gone into its construction, with uncountable small tiles made from broken pieces of porcelain and beer bottles covering the walls, ceilings, pillars, dragons, kylins and Buddha's. The millions of special tiles earned the pagoda the nickname, Ve Chai, which literally means "pieces of broken glass bottles".

It is almost impossible to find a piece of the pagoda which is not adorned with a piece of broken terracotta and glass.

On either side of the tower are dragons, which are also done, in the same style of mosaic, both telling the story of Buddha.

The main sanctuary of the pagoda is 33m long and 12m wide. In the inner hall are two rows of columns also inlaid with broken glass and pottery. The statue of Buddha Sakyamuni is made of concrete and gilded with golden powder.

Over the two rows of columns in the main hall are mosaic pictures describing Buddha's history and a 49m dragon. The dragon scales are made of 12,000 empty beer bottles. The whole site is a work of art.

On the first floor of the main sanctuary, there is a room to worship 108 Buddhas with one thousand arms and one thousand eyes.

Construction of the original Linh Phuoc Pagoda began in 1949 and was completed in 1952. In 1990, the pagoda was reconstructed under the supervision of the fifth Abbot, the Most Venerable Thich Tam Vi.

The reconstruction was implemented thanks to Buddhists' donations from all corners of the country. The finished structure, featuring a huge golden Buddha in the main hall, was a fantasy land of East-Asian colour and glass and ceramic mosaics.

Every year, tourists and Buddhists from all over Viet Nam and the world visit the pagoda to see its unique mosaics and to pray.