Buddhist vigilantes to disrobe bogus monks who fleece the public

MALACCA, Malaysia -- A Buddhist group here has set up its own vigilante corp to stop those portraying themselves as monks from soliciting money from the public. 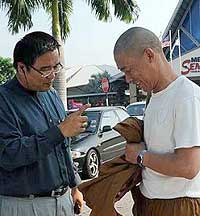 <<Ticking off: Gan (left) reprimanding a bogus monk and ‘disrobing’ him for soliciting funds at a busy street in Malacca.

The Sangha Sanctity Protection Centre (SSPC) said its “monk police” believed an organised syndicate was behind the culprits who walked in saffron robes through the populated streets of Malacca and preyed on the generosity of the public.

These foreigners hand out amulets which they claim have spiritual powers to bestow prosperity and health to those who make donations.

SSPC vice-chairman Ronald Gan Ying Hoe said its 10-man vigilante group would go out to stop the syndicate, which is known to have fleeced hundreds of people of their money and personal belongings.

“They use scare tactics to solicit donations, especially at hospitals where they target family members of warded patients,” he told The Star.

“Genuine monks do not wear watches or shoes.

“Indeed, they have no earthly asset of any sort,” said Gan, adding that the centre's monk police would be spreading public awareness about the scam and also paste posters around the city to warn prospective victims.

“Monks are strictly forbidden to roam the streets, cheating people of their money or solicit donations and are not supposed to sell items like talismans,” he said.

“We are going to disrobe' these rogues by going to areas that have become popular haunts of these con artists,” he said.

He added that a probe by the centre found that the rogue monks travelled to Malaysia from China and operated for a month before heading back to their homeland.

“One bogus monk we nabbed recently confessed his group could earn up to RM9,000 from a month's stay here,” he said.

Gan said in recent months, the centre's monk police had caught four rogue monks who solicited donations at busy streets and private hospitals in the city.

“In one case, a bogus monk in his late 40s was forced to return to his native country with the help of the authorities,” said Gan.

He added that these conmen could damage the sanctity of the Buddhist faith if drastic steps were not taken to stop them from cheating people.

Gan said he would work closely with the relevant enforcement agencies to stop these bogus monks.