Malaysian Yong Vui Kong, 21, is on death row in Singapore for drug trafficking. Malaysiakini is publishing Yong's final letters to Yetian, a member of the Save Vui Kong Campaign, as he faces death.

Singapore -- Before I begin, I would like to thank everyone for reading this 12th letter. Time passes so quickly that this will be my last letter. 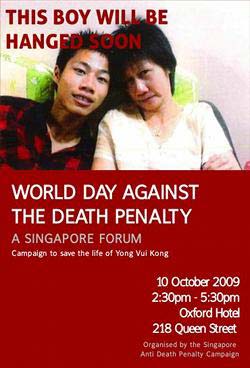 I hope that when you finished reading this letter, despite whatever that is going to happen to me, you will continue to support 'We Believe in Second Chances' campaign.

For my final letter, I would like to write about how I feel about facing death.

Firstly, I feel that the existence of the death penalty is not for the sake of retribution, but rather a way to allow the offender to understand, and fully confront, the mistake he has committed.

Take me as example, I am actually grateful that I was caught because it allowed me to understand the true meaning and purpose of life, and it has allowed me to find strength within myself. I remembered I once mentioned about the “me” before I was caught - a person who has never truly lived before.

A few days ago, my lawyer, M Ravi, came to visit me. He told me that he would send my final appeal to the Singapore's president in a few days. That will be my last chance.

On the night before the execution is carried out, many death-row inmates will have no opportunity to say goodbye to their families. For most of them, they are in no mood to think of anything else other than feeling hurt and pain before their final sentence.

But those who feel the most pain are their families. I do not dare to imagine how they would feel as they wait outside to collect the cold and lifeless body of their love ones.

If tomorrow is my last night

For me, if tomorrow is my last night, I too will have no choice. But I am ready to face the fact. After all, I was the one who made a mistake, and I have repented.

Would I be frightened? I really don't know. But I think I may not be because I am beginning to be familiar with how it feels to face death - don't forget that in this short four years, I have brushed death many times.

Indeed, I have “died” a few times before. In 2007, when I was caught, and discovering Buddhism has allowed me to be “reborned”. In 2009, when I was sentenced to death, and my lawyer helped me to appeal against my sentence.

I will not request for my last dinner to be anything sumptuous. I think I will follow my regular routine of waking up in the morning to chant my Buddhist scripts and meditate, followed by my vegetarian breakfast until night falls, put on the best clothes which my sister has bought for me, say goodbye to the rest of the inmates, and finally kowtow to the Goddess to show my appreciation and thanks.

But I cannot truly express my feelings as I really don't know how I will feel as I walk towards the noose. I guess no one will really know.

I have been through stages where I felt lost, ignorant and was suffering but because of my practice of Buddhism, it has allowed me to free myself.

NONEI am also grateful that many members of public are willing to forgive me. Being able to live until today is my greatest fortune.

I think my family has already accepted me for what I did, and also accepted whatever outcome it may be. They take comfort in the fact that I have turned over a new leaf, and that I have continued reading and practicing Buddhism.

My ordeal has also improved the relationship among those in my family, especially my siblings. But I still worry sometimes that my mother will come to know that I am no longer around.

I would like to thank all of you once again. I will not be able to share my story without your help. I shall pray for you, and wish you good health and happiness.

--------
YONG VUI KONG, a Malaysian, was sentenced by a Singapore court in November 2009 to death for drug trafficking. He was 19. On April 4, Yong lost his final appeal against a mandatory death sentence. He will be executed soon unless he is granted clemency by Singapore's president.