Petaling Jaya, Malaysia -- The Ajahn Chah Remembrance Day (ACRD)  is a special day devoted to one of the great contemporary Buddhist monks in Thailand, Venerable Ajahn Chah who is also known as Ajahn Chah Subhaddo. 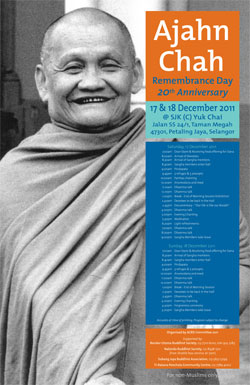 He established the first monastery in Thailand to be run by and for English-speaking monks, Wat Pah Nanachat ('International Forest Monastery') which Venerable Sumedho assisted in the setting up as the first abbot.  Venerable Ajahn Chah is especially revered for his contribution and dedication to the establishment of the practice of the Thai Forest Tradition in Buddhism outside of Thailand.

This year's event, which is the third one to be held in Malaysia, is especially significant as it marks the 20th anniversary of this great monk's passing.  The two-day event on the 17th & 18th of December 2011, will be held at the SJK (C) Yuk Chai (Taman Megah) school hall.  Monks from the UK, Canada, Australia, New Zealand, Thailand and Malaysia will be attending this event.

“When Ajahn Chah sent me to England to establish the first branch monastery there, I had a lot of anxiety. I told him about my doubts of surviving in England as an alms mendicant.

Ajahn Chah said, “You mean there are no kind people in England?”  I replied, “I am sure there are.” Then he said, “Go! Go there!”

Now, when I reflect on my 33 years of living in England-- teaching meditation, establishing monasteries, ordaining and training monks and nuns there--and how much support we have received over the years, out of the good heartedness and generosity of people there, I feel a very deep sense of gratitude.”

Born on 17 June 1918 near Ubon Ratchathani, northeast Thailand, Ajahn Chah was instrumental in establishing the Thai Forest Tradition in Buddhism in the West and was an influential teacher of the Buddhadharma.

He became a wandering ascetic after the death of his father, walking across Thailand while taking teachings at various monasteries. By also spending time in jungles infested with tigers and cobras, caves and cremation grounds, he developed a unique style of meditation by reflecting on death to comprehend the true meaning of life.

The Forest Tradition emphasizes very strongly on meditative practice and the realization of enlightenment as the focus of monastic life. A day in the life of a forest monk involves constant practice of the Buddha's path of contemplative insight, which includes living a life of discipline, renunciation and meditation. It is through this process that the forest monks can understand the inner truth and peace as taught by the Buddha. The extensive 227 rules of conduct, or precepts, must be strictly adhered to, such as consuming food between dawn and noon; not handling money; practice of celibacy.  The forest monks commonly engage in the practice of “thudong” which is wandering on foot in search of solitary places, sleeping wherever is available and eating only whatever is offered by laypeople along the way.

Laypeople wonder why forest monks undergo such a strict and disciplined regime that entails living a life of absolute austerity. The Buddha believed that living in this manner allows forest monks to simplify and refine the mind. Refinement allows them to explore and understand the fundamental causes of suffering within the human psyche and ultimately cultivate a path that leads toward freedom from suffering and supreme happiness.

The Ajahn Chah Remembrance Day seeks to provide the public with guidance by the visiting monks on how this can possibly be achieved through the teachings of the Buddha and Ajahn Chah.  It is especially relevant since we live in a day in age where our lives are full of stress, pressure and fear of uncertainties.

“The purpose of the practice, then, is to seek inwardly, searching and investigating until you reach the original mind. The original mind is also known as the pure mind.”

~ “The Path to Peace” by Ajahn Chah

Free shuttle bus service will be provided at Nalanda Buddhist Society. The schedule is as follows: