Wesak a day to reflect on the teachings of Buddha

Petaling Jaya, Malaysia -- BUDDHISTS celebrate Wesak today by paying respect to Lord Buddha on his birthday, for attainment of enlightenment and to commemorate his death. 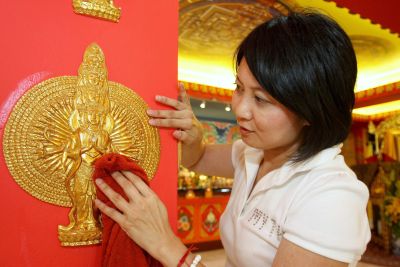 Buddhists pray in temples early in the morning, attend chanting sessions, have vegetarian food as well as take part in community service.

Sri Lanka Buddhist Temple chief monk Venerable Saranankara Nayaka Maha Thera said devotees could also commemorate and honour Buddha not just by buying joss-sticks and flowers to be offered but understanding his teachings and most of all put it to practice.

“Every religion has a beautiful set of teachings but we must all learn to practise it and understand the philosophical side of it.

“You can visit a hundred temples on Wesak Day and it will not do you any good if do not know the teachings of Buddha,” said Saranankara.

He added that one should practice Dana (act of giving), Sila (observing Buddhist precepts) and Bhavana (wisdom through meditation) not only on Wesak but should also make it an everyday ritual.

“People often misunderstand this concept. Dana does not only mean feeding the monks, but also giving in terms of material, spiritual and also donating anything from blood or even your organs,” he said.

He said in Sri Lanka cornea donation had become popular among residents there because donors believe they would receive better vision in their next life.

This year, the 59-year-old resident monk will be participating in the blood donation campaign together with fellow monks and devotees.

He said the practice had been introduced since 1986 and had become a yearly affair at the temple for Wesak and Kathina festival.

Chief High Priest of Malaysia Venerable Datuk K. Sri Dhammaratana Maha Nayaka Thera said Wesak was a day where devotees should get involved in religious activities instead of turning the day into a party.

“Unfortunately when you visit the temple nowadays, it is like a carnival,” said Dhammaratana, referring to the street outside the Buddhist Maha Vihara where he resides.

He said it was nice to see devotees of all ages coming to the temple but he hoped more would spend their time to understand the religion better, too.

“We should also refrain from talking bad about others or indulge in negative activities and try to do good,

“As devotees one should at least know their great master’s basic teachings, if not all and try to practise it,” he said.

More than 30,000 devotees from all over Klang Valley are expected to participate in the annual procession which will begin at the Brickfields Buddhist Maha Vihara in Jalan Berhala at 7pm today, passing through Jalan Tun Sambanthan, Jalan Petaling, Jalan Raja Chulan, Jalan Bukit Bintang, Jalan Pudu and back to Jalan Tun Sambanthan.