'Do good deeds to mark Wesak'

KUALA LUMPUR, Malaysia -- OFFERING  prayers for the missing passengers of the lost MH370 is among  the activities at the Wesak Day observance at the  Buddhist Maha Vihara Temple in Jalan Berhala here. 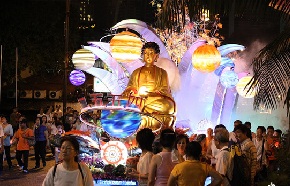 Chanting and prayers tonight will last until 4am, said the chief monk of the temple who is also Buddhist chief venerable of (the Malwatta Siam Nikaya chapter for) Malaysia, Ven Datuk K. Sri Dhammaratana Nayaka Maha Thero.

Sri Dhammaratana said the temple had been praying for all on board MH370 since the day it was lost and hoped that the plane would be found soon.

Sri Dhammaratana also reminded Buddhists in the country that Wesak Day, which commemorates the birth, enlightenment and passing of the Buddha, was the most sacred day for them and that the day was better spent cultivating spiritual values, although it has acquired a carnival-like celebration these days.

The chief monk said the word "celebration" should not be associated with Wesak Day as it should strictly be a day for prayers, meditation, observing the Buddhist precepts, charity and other kind acts such as the releasing of animals.

Every Wesak, Sri Dhammaratana said, more than 100,000 Buddhists would visit the Buddhist Maha Vihara Temple to seek blessings, pray and light candles for the departed as well as visit the exhibition of paintings and artworks at the Asoka Hall by the students of the Sunday Dhamma School.

The climax for the temple would be the highly anticipated four-hour float procession in the evening where 20 brightly decorated floats would start from the temple and go on a journey passing through some of the city's main streets such as Jalan Sultan Abdul Samad, Jalan Tun Sambanthan, Jalan Hang Lekiu, Jalan Raja Chulan, Jalan Bukit Bintang and Jalan Pudu before finishing at the temple, said Sri Dhammaratana.

This year, he said, there would be more than 70 stalls outside the temple where religious items, food and other merchandise would be sold. There will also be stalls set up by welfare bodies where devotees can donate to charity.

Sri Dhammaratana said the Sunday Dhamma School has more than a thousand students and that there was a need to expand the building.

It has raised RM2 million but still lacks RM4 million for the expansion, he said, and hope Buddhists would donate to this cause on the auspicious day.

Meanwhile, over at Desa Petaling, the enthusiasm for the Ti-Ratana Welfare Society is reflected on the six floats that will be paraded in a three-kilometre procession on Thursday.

Ven Hemaloka said different groups under the society's umbrella had each wanted to design its own float in honour of Buddha.

Each group is made up of volunteers that had dedicated their after-work hours to work on the floats since February.

They had used many elements, incorporating statues of Buddha, the Goddess of Mercy, thousands of lights as well as fresh flowers into the floats.

The roads near the society based in Desa Petaling will be closed in stages to make way for the procession which will also be joined by other Buddhist associations, including Buddhist Maha Vihara Temple.

Hemaloka called on devotees to celebrate Wesak Day meaningfully by taking the opportunity to do good to others.

"It does not have to involve money. One can give time, care, energy, resources and more.

"As Buddhists, we are encouraged to practise what the Buddha taught us which is cultivate good habits and values. It can be just doing one good deed a day and in a year, you will have 365 good deeds," he said.

At the Chempaka Buddhist Lodge in Petaling Jaya, a three-thousand Buddha chamber will open its doors to devotees on the auspicious day.

The chamber will boast rows of mini altars that are placed with handmade white Buddha figurines contributed by devotees.

Three thousand Buddhas representing the past, present and future were set up to commemorate the chanting of the 3,000 Buddhist sutras carried out for the past two years at the lodge.

At the end of the chamber stands a big Buddha head sculpture along with several smaller ones donated by temples from Burma, India and China.

The lodge's Wesak Day organising chairman Tan Kok Ing said for the sutra chanting, it made sense to have a chamber dedicated to it.

"The chanting is also soothing for devotees that come by as they walk into the lodge. On Wesak Day, there is also the lighting of 3,000 oil lamps that represents 3,000 Buddhas of the past, present and future. On the oil lamps, we will affix the names of the Buddha's disciples.

"We encourage our devotees not to worry about the past and the future but to live in the present, to do good, avoid evil and purify their mind," said Tan who is also the lodge's deputy president.

The lodge has created two floats to lead the 8km procession on Wesak Day with the national theme "New Dawn of Buddhism, Rising Tide of Mindfulness".

The floats were built by artisans from Burma who started work in February. They were assisted by four other local staff.

One float, decorated with more than 10,000 lights and 5,000 colourful flowers, depicts the renunciation of Prince Siddhartha who leaves the comfort of the palace on a chariot to seek the meaning of life and to stop the endless suffering.

The other float, which was given a touch of Burmese art and has trimmings of elephants, tells of Buddha's enlightenment and his passing with his corporeal remains placed in a stupa.

On Wednesday, a 29-float procession joined by other Buddhist associations in the Klang Valley, starts at 7pm. The number of floats coincides with the 29th anniversary of the lodge.

Ten thousand visitors are expected to turn up at the lodge, out of which 1,000 will accompany the procession. Tan foresees 5,000 to watch the procession along the route.

Over at Genting Highlands, Ven Zhen Zhong of Kuantan will lead the two-day Wesak celebrations, organised by the Genting Buddhist Group.

An exhibition will be held at the Genting International Convention Centre to mark the start of Wesak Day celebrations today followed by the presentation of Buddha's relic.

Ven Zhen Zhong will also be giving a Dharma discourse after the event.

Tomorrow, celebrations will start at 7am and end at 8.45pm.

The Bathing of Buddha ceremony, which symbolises the elimination of the three evils of greed, hatred and ignorance will mark the end of the two-day Wesak Day Celebration.

To accommodate more visitors to pay homage, Buddha bathing ceremonies will be on until tomorrow from 8am to 6pm at Chin Swee Temple, located on 13th floor of the Sky Terrace.