KUALA LUMPUR, Malaysia -- Both secular and religious groups have come together in Kuala Lumpur since Friday to mourn those who perished in Malaysia Airlines Flight MH17, just four months after the tragedy of Flight MH370. 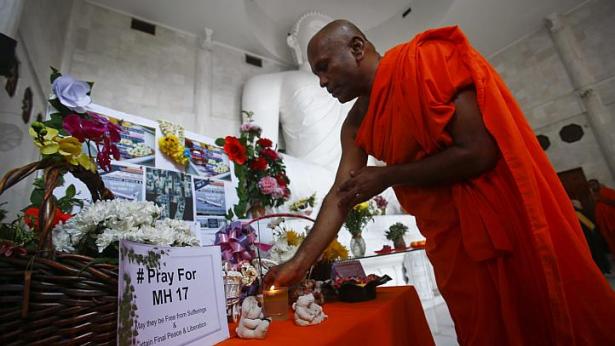 << More than a hundred Buddhist devotees and members of the public turned up for a memorial at the Sri Jayanti temple at Jalan Sentul on Sunday morning to mourn those who perished in Malaysia Airlines Flight MH17. -- ST PHOTO: JAMIE KOH

More than a hundred Buddhist devotees and members of the public turned up for a memorial at the Sri Jayanti temple at Jalan Sentul on Sunday morning, which also kicked off a fortnight of daily evening prayers at the temple.

Similar prayers will be held in about 300 other temples and Buddhist associations across the country in the coming days.

The event saw the chanting of sutras led by Venerable Sri Saranankara Nayaka Maha Thera, Chief High Priest of the Judiciary of Malaysia, and Buddhist rites to honour the dead.

The Buddhist rites follow vigils and prayers that have been held at mosques and churches in Kuala Lumpur, while a candle vigil is planned for Sunday evening at the Dataran Merdeka field.

Graphic designer Rachel Wong, who attended the Buddhist prayer session with a friend, said she was still shocked by the crash of MH17 in eastern Ukraine, and was at the temple in solidarity with fellow Malaysians.

"A tragedy like this shouldn't have happened, and it is far too soon since MH370 disappeared," said the 27-year-old. "This new tragedy is something I'm not willing to accept, but I have to because it is the truth."

Many others, like chef Nihal Wijeysiviwardenu, attended the event together with their family. The temple devotee said he took the day off to attend the memorial.

"My boss understood why I needed to come," said Mr Wijeysiviwardenu, 50. "We can't do anything else but we can pray for them (passengers who were on MH17)."

Venerable Sri Saranankara, 60, said that the last two disasters involving Malaysia Airlines (MAS) planes were something he felt personally, because some MAS personnel had been regular volunteers in the temple's charity projects for the past 12 years.

"When we have a major function, the Malaysian crew will come with 30 to 40 volunteers everytime," he said.

For the temple's annual needy student project, the MAS volunteers would not only help with the packing and distributing of school bags and uniforms, but would also contribute over 10,000 exercise books each time, recalled Venerable Sri Saranankara.

"We don't know if there were any volunteers who were crew members on MH17, but there was one volunteer who was on MH370," he said.

The senior monk urged the international community to come together and push for an immediate ceasefire in Ukraine so that passengers' remains could be recovered and returned to their families immediately.

"It's an important thing - at least in their last moment, the next-of-kin can perform their respective religious rites for them," he said. "At least then the family members can have a little comfort."