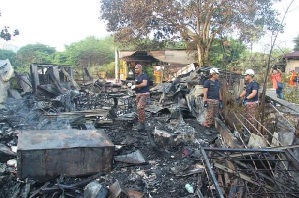 "The victims, who were local, are believed to have been trapped and could not find the way out. Initial investigations found that the fire started at the middle of the temple," he said when contacted.

"We took about one hour to control the blaze from spreading to the squatter area nearby," he said, adding, the department was investigating the cause of the blaze.