KUALA LUMPUR, Malaysia -- A grand Chinese temple on the hills of central Kuala Lumpur overlooking the Malaysian capital was the site of a unique event on November 27 where a Sri Lankan born Buddhist monk’s vision to empower the education of poor Malaysian children, most of them Muslims, was taking place without the glare of any television cameras or the national media. 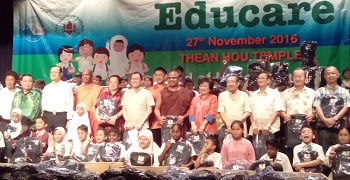 << Photo: Picture Venerable Saranankara (4th from left) with some of the donors and recipients at the ceremony on Sunday in Kuala Lumpur. Credit: Kalinga Seneviratne.

Venerable Sri Saranankara is a Sri Lankan born Buddhist monk who had made Malaysia his home since 1984 and has set up the Maha Karuna (Great Compassion) Foundation to help the needy in his adopted country irrespective of their religious affiliations. Thus, out of some 2,000 school children and their parents who flocked to the Thean Hou Temple on a rainy Sunday to receive their education bursaries, most were Malay Muslims or Indian Hindus and Christians.

“We do this in 21 places in Malaysia (and) this year we will be assisting over 16,000 children,” Venerable Saranankara told Lotus News, adding, “they are chosen by the principle on the recommendation of the teachers, who will tell us that these are the students who are finding it financially difficult and sometimes it effects their classroom performances also”.

This scheme is known as ‘Educare’ and was first organized in 2001 to mark the 12th anniversary of the Sri Jayanthi Sunday Dhamma (teaching) School at the Sri Lanka Buddhist Temple at Sentul in central Kuala Lumpur, whose chief monk is Venerable Saranankara.

An annual charitable project of the Maha Karuna Foundation (MKF) it donates school items to needy students irrespective of their religious or ethnic backgrounds. This would include school uniforms, bags, shoes, stationeries, and exercise books given to students from government schools and orphanages. The ceremony on Sunday was for students from the Kuala Lumpur area.

“This programme was started when I was in Sri Lanka in 1999 and the chief (Ven, Saranankara) was with me” explained Jacob Chan, President of MKF. “We went to his temple first and on the way we saw a lot of poor students in Sri Lanka. He asked why don't we help them with some shoes, bags, books?”

Thus the idea germinated among the Malaysian Buddhists to help needy school children in Sri Lanka – who were mainly Buddhist – and they started in 2000 helping students in some poor villages. Chan told Lotus News that today they still help about 15,000 Sri Lankan students and additionally 18,000 Malaysian students will get the same assistance in 2016.

Funds for the project is donated mainly by devotees of the Sri Lanka Buddhist Temple in Sentul, and the project is coordinated by thousands of volunteers from the temple membership. Almost all the donors and volunteers are Malaysian Chinese. However, Chan says “we don't look at childrens’ race, we support anyone - Malays, Indian, Chinese …its for everybody”.

The temple volunteers who join the Educare committee are all dedicated to practice Buddhist compassion and loving kindness to all without any discrimination. Throughout the year the program goes through many stages, which culminated with Sunday’s ceremony attended by over 3,000 people.

Registration forms for assistance is distributed to schools in Malaysia in July and teachers in the school choose the deserving students and completed forms are forwarded to MKF between August and October. These students have to visit the temple in Sentul during this period for volunteers to take measurements for their shoes and uniforms. Volunteers are also involved in sourcing the best suppliers for shoes, uniforms, bags and stationeries. In addition, they have to liaise with partner organisations in other states to organize the same.

Educare will not only lessen the financial burden of parents to purchase essential school items for their children for the coming new school term but is also designed to empower the children and families for them to succeed in their education. The concept of compassion practiced is devised not to give the recipients a feeling of dependency and shame because of their financial situation.

“Many of the families we help are finding it difficult at the beginning of school year paying fees, buying books, uniforms, especially families that have 5 or 6 children” explained Ven Saranankara. “We first gave money to families individually, but later we realized that it is not good for their mentality, especially children, to think that because they are poor we give them handouts”.

Thus the chief monk said that rather than going to the houses, show them sympathy and kindness and hand over the goods or money, they decided to organize the event in a carnival atmosphere.

“We organize the event like a carnival, give them food and other gifts including school bags. We give them like a coupon and they go to different stalls and get their food items such as fishballs, ice cream and also bags and books … when you are in a group and receive these you don’t feel that because you are poor they sympathise and give you things free” noted Ven. Saranankara.

Financial support comes not only from Buddhist temple devotees, but a cross-section of the Malaysian society - individuals, companies and foundations. “For what is good there are people who will always support it. We know this is not a fly-by-night operation. This has been going on for 17 years and it is not easy to sustain such a programme” argues Lawrence Lim of Magnum Corporation, a major sponsor of the Educare project.

“Once you find a programme like this, it is worthy of support,” he added, “as you can see this is multi-ethnic, multi-religious and really a spread of what Malaysia is… so we have no hesitation in giving our support”.

The very words ‘Maha Karuna’ impliy two great virtues of the 2500 year old Buddha’s teachings – Wisdom and Compassion. Wisdom teaches one the ability to see things as they really are, cultivated through spiritual practice, and Compassion is cultivated by serving the needy through welfare activities that are also believed to bring one good karma.

When asked if MKF has become a wealthy foundation perhaps due to the karma generated by helping such a vast array of needy students in Malaysia and Sri Lanka, the humble Sri Lankan monk with his permanent smile replied: “Maha Karuna don’t have money .. people donate to it and we coordinate the project … 95 percent of people involved (in delivering the project) are Buddhists (and) this year about 80 percent of the recipients are Muslims while only 5 percent are Buddhists”.