Ipoh, Malaysia -- Thousands of devotees gathered in Malaysian temples Wednesday to celebrate Buddha's birth, death and enlightenment -- a festival marked on different days across the region, which is also known as Wesak day. 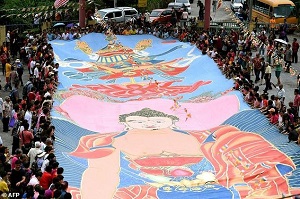 << Buddhist devotees unfurl a 25-year-old, 196-foot-long sacred 'Thangka' under the sun during Wesak day or Buddha Day festival celebrations at the Enlightened Heart Tibetan Buddhist temple in Ipoh on May 10, 2017

In the idyllic city of Ipoh in western Perak state, surrounded by limestone hills, hundreds of people came to seek Buddha's blessings.

Jonas Wong Wai Leong, 30, came with his new bride to pray for a baby and wealth.

As an offering, he carried a Buddha statue and placed it on the altar of Ipoh's "Enlightened Tibetan Buddhist" temple.

"I just got married. Today we prayed for prosperity and we asked for a newborn healthy baby," Wong, who lives in Kuala Lumpur, told AFP.

Like many other devotees, he also lit candles as a mark of respect.

"I am so happy today. The temple gave us rice and sugar. I am going to consume them for strength and good health," he added.

Perak was once a rich state, with the tin rush of the 1880s resulting in a boom.

But now many locals migrate to the capital Kuala Lumpur for jobs.

Buddhism is the second largest religious denomination in Malaysia after Islam.

There are approximately 5.4 million Buddhists in Malaysia, most of them ethnic Chinese, out of a total population of 30 million.
TOP