SEREMBAN, Negri Sembilan (Malaysia) -- The Syariah High Court here today decided that Nyonya Tahir, 89, was not a Muslim when she died and that she could therefore be buried according to Buddhist rites. 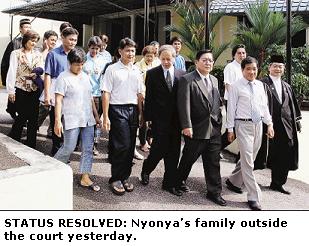 Judge Mohd Shukor Sabudin ordered that Nyonya’s body, which had been kept at the Tampin Hospital mortuary after she died of old age last Thursday, be returned to her family.

"The court allows the family of the deceased to proceed with her funeral and orders the Tampin Hospital to hand over Nyonya’s body to them."

As Shukor left the court, Malaysian Chinese Association (MCA) Religious Bureau deputy chairman Koo Chin Nam, who was observing the proceedings, shook hands with several MCA representatives who were at the hearing. Koo is also a Syariah lawyer.

Nyonya’s children and grandchildren in the public gallery were seen hugging and shaking hands following the decision.

Earlier, Siti Sharlina had told the court they had made the application after the deceased’s identification card, which carried the name "Nyonya binti Tahir", indicated she was a Muslim.

Siti said the word "binti" and name "Tahir" were normally Malay and Muslim, while the records at the National Registration Department (NRD) had also indicated Nyonya’s race as Malay.

She referred to Article 160 of the Federal Constitution, stating that a Malay was a Muslim.

However, Siti said the applicants had also asked the court to consider that the deceased had lived and practised the Buddhist faith since young.

Siti said the deceased had said in her will that she wanted to be buried according to Buddhist rites.

During the proceedings, two of Nyonya’s children, Chiang Ah Fatt, 40, and Chiang Kwai Ying, 43, were called to give statements on their late mother’s lifestyle, as well as their wedding ceremonies.

Speaking through a translator, Ah Fatt told the court that he had lived with his mother and that she was a Buddhist and had told her children that she had wanted to be buried as one.

He said they had prepared her a burial plot next to that of her late husband.

"My mother did not follow the Muslim teaching and lived and prayed as a Buddhist," he said. "She also had a Chinese name, Wong Ah Kiew."

Kwai Ying told the court they had approached the National Registration Department in 1986 to change Nyonya’s name to Chinese, but were not successful.

It was the first time in the history of the Syariah Court in Malaysia that two non-Muslims were called to give their statements to help the court reach a decision.

President of Malaysian Syariah Lawyers Association Muhamad Burok said this clearly showed the Syariah Court was not just to safeguard the rights of the Muslims, but also to ensure justice for non-Muslims.

"I am really happy with today’s proceedings.

"It was a clear case of fairness and justice to all," he said when asked to comment on the Syariah Court’s decision in relation to the funeral rites of 89-year-old Nyonya Tahir.

Muhamad said Nyonya’s case should be an example for future reference.

"In future, we should use this as a landmark case to give everyone an equal opportunity to seek justice," he said.