Kuala Lumpur, Malaysia -- Some faint-hearted Chinese shudder to think of the seventh lunar month, also called the Ghost Month. This year, many of them may be going to bed early (with bedroom lights on) as there are not one but two ghost months. Good news to the denizens of the underworld who are getting a 60-day holiday. Bad news for us, mortals (especially the night birds)! 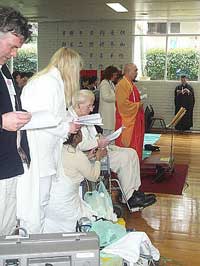 The Chinese seventh month is known as the ghost month because the Chinese believe that the Gates of Hell are opened then to release the spirits of the underworld to roam on earth. But who can be sure? No mortal knows this for a fact.

However, opinions are divided on the celebration of the Hungry Ghost Festival. Some insist that it is observed for the first seventh month only while others say it is better to “celebrate” the second seventh month. Yet others do not mind observing the festival twice.

“Although there are two seventh lunar months this year, it’s a norm for the Chinese to observe only the first seventh lunar month or the actual ghost month,” says Dr Yam Kah Kean, assistant professor of Department of Arts and Social Science, Universiti Tuanku Abdul Rahman (UTAR) in Petaling Jaya.

The second seventh lunar month, a leap month, will be ignored, he said.

In China, the Ghost Festival is celebrated on the 15th day of the seventh lunar month. Historically, families offer newly harvested grain to departed ancestors on this day, which also coincides with the Buddhist Ullambana (Deliverance) Festival and the Ghost Festival.

Since these traditions honours the spirits of the departed, the seventh lunar month is known as Ghost Month. During this time, the “good brethren” (ghosts) return to earth to feast on offerings made by the living. Over time, the Ullambana Festival and Ghost Festival have melded together.

Spirits without descendants to care for them are not forgotten. They are summoned during the Ghost Festival to enjoy the warmth of life among the living. Generally, the Chinese observe the Hungry Ghost Festival from the folkloric rather than religious aspect, explains Dr Yam. This year, the first seventh lunar month is from July 25 to Aug 23 while the second falls from Aug 24 to Sept 21.

It has been 38 years since the last double seven months occurred in 1968. There were also two Ghost Months in 1938 and 1949, which is a lapse of 11 years and 19 years.  According to the Chinese Almanac (or Tong Shu), the seventh lunar month falls in autumn – a time of rains as well.

In the northern states, the Chinese pray to appease the King of Ghosts so that wandering ghosts do not disturb the living. They can pray on any day of the seventh lunar month but some dialectic groups (particularly the Hokkiens) observe the 15th day of the month for the ritual while the Cantonese carry out prayers on the 14th day. Foods are laid out for the wandering ghosts and paper monies are burnt as offerings.

Taoists do not regard the seventh month as the ghost month as it is a folk belief rather than a religious one. However, they celebrate the 15th day of the seventh month, known as Zhong Yuan Jie (literally translated as Middle Beginning Festival). On this day, they worship the Earth Official (deity) in the belief that if they confess their sins, they will be absolved from them.

Sinologist Lai Kuan Fook says: “The Chinese believe that the Gates of Hell is opened during the seventh month. So, the Ghost Month is like a holiday for the ghosts. Descendants offer foods such as pork, chicken and rice wine to their departed ancestors.

“Wandering spirits that do not have any descendants will also be appeased. As they cannot enter the homes of others, some kind-hearted people offer foods and prayers by the roadside. Repentant wrong-doers will also pray to the ghosts of people they have wronged or harmed to asked for forgiveness,” says Lai.

During this month, makeshift tents are built. The hungry ghosts are feted with food and entertainment in the form of Chinese opera or pop songs. However, the Chinese generally frown upon skimpily attired women and their raunchy performances, which are deemed disrespectful.

Marketplaces are especially popular venues to set up tents to appease the ghosts. Lai cites the Chinese folk belief that “these places are a food haven and it is believed that ghosts would frequent them. To prevent the ghosts from causing any disturbance and to avert bad luck, traders would chip in to hold a celebration for the ghosts.”

This year, the Chinese can choose to pray to wandering spirits on either of the seventh lunar months or both, says Brian Ang, a feng shui master from Subang Jaya.

Traders and businessmen also worship the “good brothers” (roaming spirits) in the hope that their businesses would prosper. They pray at the start of the first seventh month to get their blessings early.

“The Chinese Ghost Month is regarded as a new year for the spirits of the netherworld. This year, the spirits get a 60-day holiday instead of the annual 30-day,” says Ang, who plans to appease the spirits during the two seventh months “to reap double blessings”. The Chinese also believe that the seventh month is inauspicious for the opening of outlets, moving house, open house celebrations, renovations or weddings.

This month, especially, the fear of ghosts can be great to some, particularly at nightfall. The thought of lurking shadows can be unnerving. Television stations have a field day screening horror movies during this time.

“The Chinese should re-emphasise that the seventh month is a time to practise filial piety and compassion,” says Ven Hui Xian, 31, abbot of Fo Guang Shan, in Taman University, Petaling Jaya.

The Hungry Ghost Festival has its origins in Buddhism. However, the belief about “the opening of Hell Gate” is not associated at all to Buddhism, he says. The Chinese Buddhists celebrate Yu Lan Festival on the 15th day of the seventh month. Yu Lan is a Sanskrit word which means “salvation.” Themes of filial piety and salvation are found in the Yu Lan Festival and the Hungry Ghost Festival.

Ven Hui Xian relates the legend of Moginlin (or Mulian) who saved his mother from Hades. Moginlin, a disciple of Buddha, learnt that his mother’s ghost was suffering in Hell. As she did terrible things when she alive, she became a hungry ghost.  Her son took pity on her and wanted to save her.

“Today, the seventh month is a time to practise filial piety with puja (prayers) and to give dana (a Sanskrit and Pali word meaning generosity or giving) so as to transfer merits to the dearly departed. It is also a month to cultivate good morals,” he says.

The Chinese community fears the seventh month which is associated with ghosts. However, the Buddhists regard it as a month of filial piety to try and perform good deeds and get blessings from prayers, says Dr Eric Chan Kwong Djee, 35, a Brisbane-based lecturer. A graduate doctor, his passion is to study life and death.

The Chinese belief of the seventh month being a ghost month is so strong that it is difficult to change it. Businessmen record brisk sales of paper paraphernalia for the dead during this time.

Nevertheless, one should not stir up fear about ghosts but promote love, filial piety and forgiveness. During this month, a common ritual is the offering of foods and the burning of incense paper and hell notes by the roadside and the making of makeshift tents to appease wandering spirits.

“Logically speaking, this once-a-year offering of foods isn’t really going to fully satiate the spirits. Culturally, it makes sense because those who perform the ritual deem that they have done their bit for the ‘good brothers’ and, hence, are protected,” Dr Chan says.

Whilst he is not against the idea, he feels that there is no need to burn paper offerings to appease these spirits. One can consider other options such as giving dana and accumulating (and transferring) merits to the deceased.

He thinks that one should not over-criticise another’s cultural practice. “Some people may not be open-minded. If you attack their cultural beliefs and practices, we leave them in a terrible state. We should try and show empathy towards their actions,” says Dr Chan.

“Psychologically, their actions have their functions. In this modern era, scientific-oriented education has challenged traditional beliefs and rituals but have not been able to provide a complete system explaining life and death.”

A Buddhist, Dr Chan does not pray to the “good brothers” during this month and does not think it is necessary to do so. For him, “generating positive thoughts by blessing the world and through cleansing and healing of Mother Earth” suffices. These days, some Chinese are confused whether to appease wondering spirits because it is said that once you begin the ritual, you need to follow through every year.

He advises that one should not get too engrossed about ghosts and go berserk. If you lead a balanced life, have a good diet, stay healthy and have a positive attitude, you need not fear ghosts.

In fact, Dr Chan says: “The most terrible ‘ghost’ is the ghosts in your heart. Catch the greedy ghost, the ghost of fear or even the ghost of jealousy within you.” Liew Chang Huat, 66, president of Chempaka Buddhist Lodge in Petaling Jaya says that the Chinese community will observe the first or actual seventh month, not the leap seventh month. To the Buddhists, the seventh month is a time to remember departed ancestors with prayers in the temple.

Rev K. Dhamma Ratana of Buddhist Maha Vihara, Brickfields says: “It is good to remember the departed once a year (during the seventh month) and to conduct prayers for them and also transfer merits. Even Buddhists can’t say for certain whether the departed ones can or cannot receive merits. However, it is the duty of the living to pray for the departed since we can’t give them material goods.

“When transferring merits to the deceased kin, it is important to focus one’s mind on this transfer and when the dearly departed receive the merits, the living will be blessed with double merits.”

Fear is all in the mind and those who are spiritually weak will easily be frightened.  Rev Ratana tells the story of two men who walked past a funeral pyre during midnight. “They were so afraid of seeing ghosts that they thought they saw two eyes through the burning pyre and imagined the ghost eating the body and fainted.  “Later they realised that their imagination went a bit too far. What actually happened was that a cow was feeding on some coconut leaves across the road from the pyre. And we know whose eyes they saw!”

Dr S.N. Goh, principal of Institute of Tao Studies, in Kuala Lumpur, says: “The Chinese seventh month is not necessarily a bad month. Taoists pray to the Earth Minister (or Earth Official) on the 15th day of the seventh month to ask for forgiveness of sins. This day is also a good day as it is the birthday of Soon Ti or Emperor Soon, who was renowned for his acts of filial piety.

“A table with offerings can be set up in front of the house to pray to the Earth Minister. The auspicious hour to pray to this deity is from 8am to 10am, noon to 4pm and 9pm to 11pm.”