The Dharma of no language 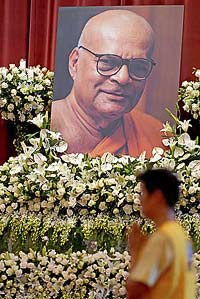 << Sombre but meaningful and moving. A scene at "Chief's" funeral. Picture by Jeff Ooi (www.jeffooi.com)

Kuala Lumpur, Malaysia -- On any blue, sunny day, when we bring ourselves out into the open and bask in the bountiful brightness and color, we forget how the sun and the cloudless sky make all this happen. The greenery of the palm and the grass, the bright red tone of the rose, and all the wondrous kaleidoscope of life depends on a day when that bright sun of ours smile upon us. It seems to be there... always.

And so we take our walk as usual, and sip our tea in ways we have been accustomed to. The mundane ness of it all makes us take for granted that the shine from the sky which colors our life on the ground will always be there. Until a time comes when stormy days bring gray mood into our senses and we wonder where have all the sunshine and brightness gone to.

Walking past the main office of the Buddhist Maha Vihara in Kuala Lumpur, we could once see a bespectacled monk in his flaming orange robes. His smile was always ever ready, and his CNN occasionally switched on. Sometimes we would hear booming laughter coming out from his quarters. Sometimes we see his dog cozying beside his bed. Sometimes we would see his bedroom door ajar. But when we take a peep in anticipation, we find the room empty but the sign still says “In”.

Things won’t quite be the same again walking past his quarters after August 31, 2006. Where once we would find Malaysia’s Buddhist icon resting on his trusted bed, what greets us now is an iconic face looking at us from the rows of photographs and paintings strapped along the walls leading to his room. His stuffed toys - “I’m getting ready for my second childhood” – still line the shelves besides his working table, as are the many certificates, honorariums and felicitations. And of course the books written by him, 53 at the last count, stacked up behind his chair and around his many cupboards.

Who could forget the many dignitaries streaming into his room to pay respect to one of the most recognizable face of Buddhism in the east? These VIPs come in many types and shapes: revered Dharma teachers, whether in Mahayana, Vajrayana, Theravada or Zen robes, Prime Ministers and Presidents of countries, Chairmen of prominent Foundations, fellow religionists from his inter-faith group, meditators, teachers, apprentice (samanera), lay Buddhists, dogs and cats.

The Chief was once asked how he could cope with so many kinds of people and “beings” looking out for him and how he found time to entertain every one of them. He replied that “You don’t waste time spending it on people. You just pay attention to the moment when you are with them. When you do that, it doesn’t matter if it takes just a while to have the meeting, or to be involved in a long (drawn) discussion. A moment of well spent attention is enough to get anything done.”

Once a lost British tourist wandered into the Vihara and walked into his room. Her name was Mary. Chief called her in and asked her what she was doing there. Since that afternoon was pretty gloomy, with rain clouds threatening, she thought it would be good to just get a shelter. He asked her if she was a Buddhist, and she replied she’s not into anything. And Chief said “then you are a Buddhist, because Buddhists don’t believe in anything.” He proceeded to give her his best seller, “What Buddhists Believe”. Mary walked out of the room that day with that book and a new name, “Khema”. It was that kind of well spent moment that the Chief mastered so adeptly.

And paying attention to the moment doesn’t mean to be with those who speak the same language, having the same ideals or professing the same faith. A delegation of Mongolian monks once came to pay their respects to Chief. After the customary exchange of greetings, the venerable proceeded to ask the monks how there were doing in Malaysia. The monks looked at one another and then promptly replied in Mongolian. Chief looked at his attendant, a Burmese student who himself knew very little English, much less Mongolian, both looking flabbergasted. But somehow the exchanges in English and Mongolian continued for a full five minutes. Neither side understood another, but at the end of it - after three simple bows by the seemingly happy monks, the Burmese in attendant standing with palms folded together and a smiling Chief - said it all: The Dharma has no language.

And it is the “Dharma of no language” that Chief has been teaching his devotees all his life. He has told his congregation many times to abhor meaningless rites and rituals, shun sectarianism, give themselves to social services and most of all, try to put the Buddha Dharma into practice.

The use of his three fingers posture is well known in pointing out the three ‘P’s: pariyatti (learning the Dharma), patipatti (practicing it) and pativedha (penetrating it and realizing its goal). “If we can all do these three things,” he once said, “then we don’t need to be known as Theravada, Mahayana or Vajrayana.” All these “yanas” he said, are man made. “The Dharma of no language after all, is understood by all beings, regardless of schools and traditions,” he stresses time and again. Perhaps, that is why his dog is always by his side.

Another characteristic which have defined Chief was how sectors of the Buddhist community have called upon him as their own. He was rector and spiritual adviser to countless societies and associations, from student associations to community centers and welfare home to funeral services. He was embraced all the same by Mahayana practitioners, Theravada Vipassana meditators and Tibetan Lamas. When it came to chanting at a blessing ceremony, he would be equally at home rendering the Mangala Sutta in Sinhalese, Thai or Burmese.  Or listen respectfully to verses of the Heart Sutra chanted in Chinese and mindfully observing the Padmasambhava mantra together with his Tibetan brethrens.

“Remember,” Chief once said to one of his student, “the Buddha did not teach Theravada, Mahayana, Vajrayana or Zen. He taught Dhamma-Vinaya, the teachings and the discipline. This is the essence, the root to what it all means to be Buddhist.”

Yes, walking past his quarters after August 31, 2006 will never be the same again. More than anything else, the echoes of Dharma coming from a great master will be sorely missed. He has left not only a legacy of classic books, one of which, “What Buddhists Believe” has been translated into 16 languages, or left an indelible mark on the compound of what is today the Buddhist Maha Vihara – the largest Sinhalese Buddhist temple outside of Sri Lanka. More importantly he has embellished the true teachings of the Buddha to countless lay Buddhists. These are the seeds that pay tribute to his true legacy - the placement of a progressive and spiritually inclined Buddha Dharma in its true footing.

The Chief may have gone, but his thoughts, ideas and spirit of mutual inclusiveness will live on. The Dharma of no language will go on to express the sublime teachings of the Buddha in ways no one in his generation could have ever imagined – in podcasts, via web pages, through iPods, cable television, in music, films and documentaries, eBooks, wireless platforms such as mobile phones, digital text, images, audio, video, in bits and bytes. And most important of all, he has inspired a whole new generation of Dharma inclined technophiles, who have taken his beliefs and transformed them into practical initiatives.

And so in many ways, the Chief that we know and love have not really left us. Like the Buddha, and His teachings, Chief will always be embellished in the hearts of Buddhists, more so in Malaysia and Singapore. May his life inspire us to lap on the Dharma, like waves breaking onto shore. May this great Dharma teacher, the Chief Venerable Dr K Sri Dhammananda Nayaka Maha Thera, attain the bliss of Nibbana.