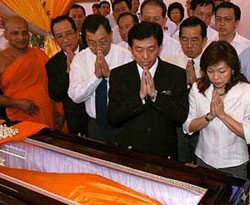 “The passing of Reverend Dhammananda is a great loss to Buddhists in Malaysia and the world. He was a highly respected and knowledgeable person with a great devotion to Buddhism,” said Ong.

He said Rev Dhammananda had selflessly shared his knowledge, experience and wisdom with Malaysians, particularly Buddhists in the country.

“For more than half a century, Rev Dhammananda brought about peace and harmony to Malaysia’s multiracial society. Buddhists in Malaysia will definitely miss him a lot,” said Ong.

Dr Koh said Rev Dhammananda did not only build the Buddhist Maha Vihara during his 54 years’ stay in Malaysia but also built up the Buddhist community, especially the English-educated devotees in Malaysia.

An eulogy ceremony will be held at 1pm tomorrow and the cortege will leave at 3pm for the Nirvana Memorial Park in Semenyih.