Kuala Lumpur, Malaysia -- Raw emotions were displayed at the eulogy ceremony to commemorate the achievements of the late Chief Venerable Dr K Sri Dhammananda. The eulogy service was held at the Dewan Asoka of the Buddhist Maha Vihara where the late venerable’s body was laid for the public to pay their last respects. Delegates of the diplomatic corp., seasoned Buddhist leaders and fellow religionists tried hard to keep their feelings in check as one after another poured tribute to the revered venerable. 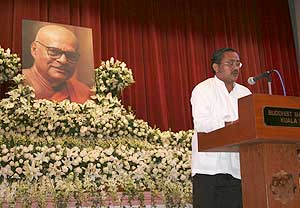 The eulogy began with a sharing by Mr Sarath Surendre, President of the Sasana Abhiwurdhi Wardhana Society. In a speech choking with emotion, he said that the venerable would be dearly missed as he had been with the Vihara for 54 years. He added that it was a great privilege to have known the venerable, as he was a prolific teacher who had served tirelessly to develop Buddhist education. Mr Surendre also mentioned that the late venerable not only gave inspiration to devotees and members of the Vihara, he also gave strength to humankind all over the world, always emphasising the importance of developing peace and harmony. He said that the passing of the venerable would leave a void which no living mortal could fill. He concluded his speech by encouraging all to emulate the venerable’s revered quality and to continuously give courage and love in whatever they do. 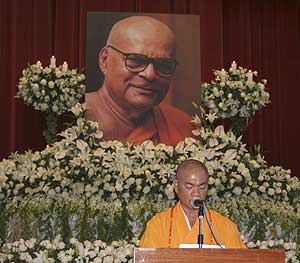 Ven. Sik Jin Heng, President of the Malaysian Buddhist Association then took up where Mr Surendre left off by making the congregation aware that it was the Chief Venerable’s personal effort which sparked the revival of Buddhism in Malaysia. He said that through untiring publication efforts, the late venerable was able to spread Buddhist education not only in Malaysia, but throughout the world. As an example, Ven. Sik Jit Heng said three months before his death, Ven. Dhammananda managed to write his last book on "Where Is Buddha".
He said that the Chief venerable was very much involved in leading Buddhism in Malaysia into a new era, of which the fruits are currently being enjoyed by the younger generation. He also paid tribute to the Venerable Dhammananda for bringing together all the three major Buddhist traditions, that is, Theravada, Mahayana and Vajrayana to further the cause of Buddhism. On behalf of his movement, the venerable later pledged to strive on to realize the visions of the late Chief venerable. 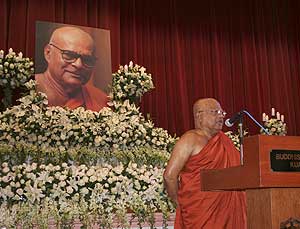 The next member of the Maha Sangha, Ven. Dr. Kakkapalliye Anuruddha Nayake Maha Thera, former Vice Chancellor of the Buddhist and Pali university, Sri Lanka said what was felt in the hall by members of the congregation was equally felt all over the world. This is because of the impact the late Chief venerable made with his powerful speeches. Ven. Dr. Kakkapalliye said he had lost a true friend, but was proud that the late venerable was a product of Sri Lanka who made a difference in the world. He said that we could learn many things from Ven Dhammananda, especially his unassuming ways of talking to people. Ven. Dr. Kakkapalliye also urged everyone to follow the example set by the venerable by going out to reach out to the people, emulating the benchmark established by the Buddha. He also mentioned that compared to monks in Sri Lanka, Ven Dhammananda can be considered as a prolific and unparalleled writer. 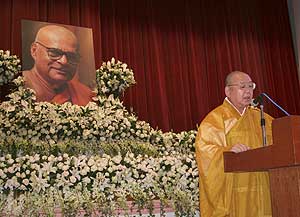 Next on the list was a reading of condolence by Ven. Dr Kyuse Enshinjoh, President of the Buddhist Summit and Founder priest of the Nembutsushu Buddhist sect of Japan. The message was read by Ven. Fujikira, Secretary General of the Buddhist Summit, Japan. In his message, Ven. Dr Kyuse Enshinjoh said that he greatly admired Ven. K Sri Dhammananda because to have accomplished what he had done in a multi-racial, multi-religious country like Malaysia was not easy. He paid tribute to the venerable’s early years in overcoming various difficulties to develop Buddhism in the country. He also hoped that Buddhists can emulate the late venerable’s effort to promote social welfare activities and Buddhist education for the young. He also paid tribute to Chief Venerable’s immense contribution to promote harmony with other religions and Buddhist leaders throughout the world. 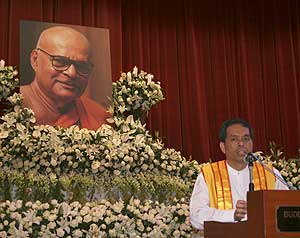 President of the Buddhist Missionary Society of Malaysia (BMSM), Mr Ang Choo Hong then continued on with the ceremony by sharing his experience on how Chief Venerable worked tirelessly to bring Buddhism beyond the walls of the vihara. He said that the venerable’s zeal for Dharma missionary, courage and aspiration was unmatched. It was through his selfless dedication to give Dharma talks that millions at large were able to gain access to the true teachings of the Buddha. Mr Ang also mentioned that BMSM existed because of the Chief venerable and was in fact, the last surviving founder of the society. He then related a poignant story which reflected the venerable’s great wisdom. It was said that when the doctor broke the news that he had cancer, Chief venerable broke into laughter. The doctor then asked him why he was laughing, since most people would regard the news as a major problem. Chief then said to him, “Sickness doesn’t create problems. Sickness only becomes a problem when it is brought to the mind.” In conclusion, Mr Ang pledged to continue the good work of the Chief venerable and to keep the magazine “Voice of Buddhism” loud and clear. He also pledged to continue working closely with Sasana Abhiwurdhi Wardhana Society and to continue supporting the monks in the Buddhist Maha Vihara. 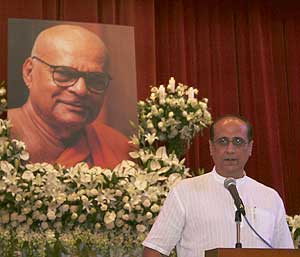 Following on, the Deputy President of the Malaysian Consultative Council for Buddhism, Christianity, Hinduism and Sikkhism (MCCBCHS) Mr Pradip Kumar delivered his eulogy on how Venerable Dhammananda served the society until his last breath. He said that as the founding member of the MCCBCHS 25 years ago, it was appropriate that he would leave as the (current) President. Mr Pradip said that it was an honour to have served under the venerable and that the robe he wore truly reflected the wisdom of the person. He also gave a mention that the Chief was a front runner in interfaith activities in Malaysia. The venerable would never fail to give honest and frank views about a situation. On that note, Mr Pradip concluded that the venerable was indeed a man for all season and a man for every one. 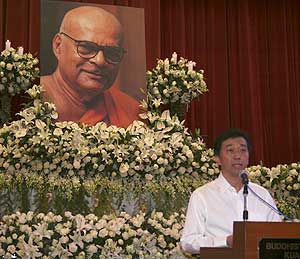 The next eulogy was delivered by Y.B. Dato Seri Ong Ka Ting, the Minister of Local Government and Housing, Malaysia, who represented the Government of Malaysia at the eulogy service. Dato Seri Ong commented that the late venerable had dedicated his whole life to serve all mankind without regards of creed or race. The Minister said the venerable had gained respect from people of all walks of life and from those professing different religions as well. He was a man loved by everyone and his compassion to all beings was legendary. Dato Seri Ong then said that while the venerable is no longer with us, his teachings will continue to guide us. Sri Lankan President Mahinda Rajapakse said the death of Venerable Dr K. Sri Dhammananda was a great loss not only for Sri Lankans and Malaysians but to the Buddhists throughout the world. Rajapakse said the venerable had devoted his entire life to Buddhism that gained him a deep understanding about Buddha's teachings. His effort has seen the publication of 70 titles. The president also noted that most of his books have been translated into 16 different languages to reach devotees of different nationalities; the languages include Russian, Mandarin and others. He commented the venerable for showing spiritual strength and giving his undivided vocation in promoting Buddhism around the world. His speech was read out by Sri Lanka’s Prime Minister Ratnasiri Wickramanayake. 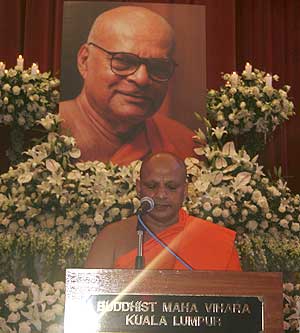 Finally, the eulogy service was concluded by Ven. K Dhammaratana Thero. The newly designated Chief monk of the Maha Vihara paid tribute to Ven. Dhammananda by saying that he had gained “true independence” on Malaysia’s independence day (August 31). He reminded the congregation to reflect on the fact that all conditional things are impermanent and to reflect on the late venerable’s achievements, especially on his single minded commitment to develop the Sangha and for the well being of all beings. Ven. Dhammaratana pledged to continue the good work started by the late Chief venerable. He also pledged to ensure that the Buddhist Maha Vihara continues to remain as the hub for Buddhist activities in the country.

The venerable then passed a motion of thanks to the congregation who had gathered for the eulogy ceremony.