KUALA LUMPUR, Malaysia -- The scent of burning joss sticks filled the air in Buddhist temples around the country as thousands of devotees paid homage to Buddha on Wesak Day. 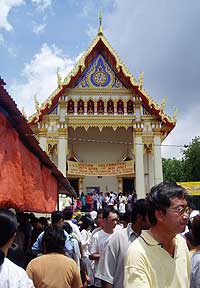 At the Buddhist Maha Vihara in Brickfields here yesterday, devotees sought blessings from monks and tied yellow threads around their wrists meant to protect and bless them at all times.

The street leading to the temple was a hive of activity, with stalls selling flowers, drinks and food as well as volunteers collecting donations for welfare and children’s homes.

An exhibition titled amarekha displaying wooden sculptures of the various postures of Buddha from Sri Lanka was also held at one of the halls in the temple.

He said it was important that the younger generation was taught the original way of commemorating the sacred day.

A procession along the streets near the temple was held later in the evening.

At the Thai Buddhist Chetawan Temple in Petaling Jaya, children and adults rang bells that were placed at the compound of the temple and lit lotus-shaped candles and oil lamps.

Among them were beautician Cheam Yee Siew and her two children Shevone Seow, seven, and Sven Seow, three.

“I want my children to learn the teachings of Buddha. Every year, I bring them to Buddhist temples on this holy day,” she said.