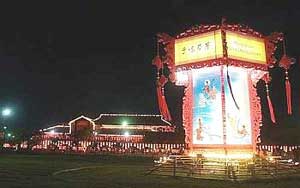 << All lit up: A 9m-high giant lantern standing on the Dong Zen Temple grounds to help usher in Chinese New Year.

The temple grounds are decorated with lights, lanterns and flowers in conjunction with the 2008 Chinese New Year Lantern and Flower Festival from Feb 3 to 24.

Organised by Fo Guang Shan (FGS) Malaysia, the event this year is expected to attract two million visitors throughout the celebrations, from the eve of Chinese New Year to the 18th day of the Chinese lunar calendar.

A series of programmes that include various festive celebrations, cultural exhibitions and traditional Chinese New Year activities will be held at the temple.

In addition, a parade of costumed characters from traditional Buddhist and Chinese stories plus creative floats would be held.