Kuala Lumpur, Malaysia -- THOUSANDS of devotees are expected to converge at Buddhist temples throughout the country tomorrow to pay homage to Lord Buddha on his birthday and to celebrate his attainment of enlightenment as well as to commemorate his death. 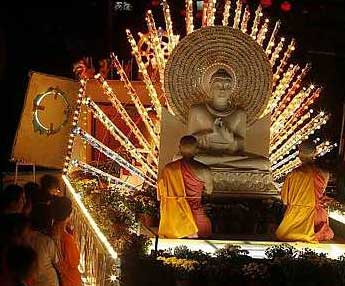 << READY FOR WESAK: With Lord Buddha’s statue on it, this piece called Compassion Equality will be one of the highlights throughout the Wesak procession.

The temples in the Klang Valley have planned elaborate programmes and activities for the occasion.

Wesak Day — as this day is called — is universally commemorated on the full moon in the lunar month of Viskha, usually during late April or early May.

Wesak Day is a holy day in the calendar of Buddhists worldwide where devotees observe precepts and teachings of Lord Buddha their teacher, and reiterate their determination to lead noble lives.

In Kuala Lumpur, the Buddhist Maha Vihara in Brickfields is having its annual float procession involving about 25 colourful floats sponsored by various organisations.

According to the Buddhist Chief High Priest of Malaysia Venerable K. Sri Dhammaratana, the float procession signifies unity, and he expects about 30,000 people to join in the 12km parade.

“We are taking on a different route this time around and one of the stops is Bukit Bintang,” Dhammaratana said.

A float in the form of a car is being constructed for two monks to sit inside, chant prayers and sprinkle holy water throughout the procession.

Dhammaratana said in view of the economic uncertainty ahead, he had to make do with simpler floats, doing away with the costlier materials and decorations, while reusing some of the past year’s designs and structures for this year.

“We may be cutting down expenses but will continue with the meaning and importance placed on this yearly practice,” he said.

Tonight, the lighting of oil lamps will take place, and a glorious glow is expected to turn the temple vicinity into an enchanting enclave. The act of illumination signifies dispelling the gloom and darkness of ignorance.

A total of 86 lanterns, including two large ones, will light up the temple’s premises.

The hoisting of the Buddhist flag and the singing of Buddhist hymns will start off early in the morning when devotees will assemble for the day’s ceremonial proceedings.

The devotees will take along offering items like flowers and joss sticks, a reminder of the Buddhist teaching that life is impermanent as flowers wither, joss sticks burn out, and ultimately, bodies decay.

Dhammaratana commented on how the Wesak commemoration nowadays had evolved into a carnival-like atmosphere from its original way of a quiet meditative day to reflect on the Buddhist precepts and teachings, and to rejuvenate oneself for righteous living.

“In Sri Lanka, such a tradition lives on. Devotees and volunteers will draw the life of Buddha and create exquisite scenes from it that feeds knowledge to the public. They will also walk the streets and distribute free food and drinks to people,” he said.

“The exchange of Wesak greeting cards by post is also a norm although there are few people doing it here,” he said.

Free vegetarian lunch cooked by volunteers will be provided for the public at the temple.

Minister in the Prime Minister’s Department Tan Sri Dr Koh Tsu Koon is expected to launch the float at the the four-hour procession, which will start at 6.30pm.

On May 16, the temple will be hosting the Wesak International Cultural Show at its main Asoka hall.

This is the third year the show is being held, which encompasses a two-and-half-hour performance by troupes from various countries.

Among the participating countries are Japan, Thailand, Laos, Myanmar, Sri Lanka, Nepal, India, South Korea and China, each of which will be performing its own dance on Buddhist-related themes.

The Tourism Ministry has also lined up a cultural show although it has nothing to do with Buddhism.

Attendance to the show is by invitation and about 1,000 are expected to be there.

6.pm to midnight - Blood donation campaign at Asoka hall in the temple


7.am - Hoisting of the Buddhist flag

7.30am - Observance of the Eight Precepts

8.30am - Breakfast to the Maha Sangha

9am to 10.30am - Blood donation campaign at the Asoka hall