The Angkor Wat of Malaysia

Ulu Tiram, Johor (Malaysia) -- Large numbers of Singaporean faithfuls flock to Buddhist temples in Johor to pay homage, pray and make donations, and these donations have expedited the development of temples there. 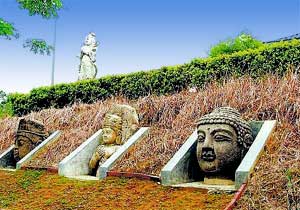 << The temple is full of stone carvings, even the pitch at the car park is decorated with stone Buddha heads. Photo courtesy: Guang Ming Daily.

Thanks to the contribution of a Singaporean collector who is also a devout Buddhist, thousands of ancient Buddha statues as well as time-honoured stone, wooded and copper statues have been placed at the Fa Yu Chan Si temple in Ulu Tiram.

These relics include 500 Luo Han statues, thousand-year-old stone tortoise statue, statues of Bodhidharma and the God of Mercy, among others. Such a rich collection has made the temple look like an ancient temples teeming with ancient ruins.

Penang in the northern part of the country, is renowned for its Kek Lok Si temple, and now in the country's southern gateway Johor, a garden-style temple with hudnreds of stone, wooden and copper statues as well as epitaphs, the Fa Yu Chan Si temple is fast taking shape.

Built on a 3-acre site about 2km from the town of Ulu Tiram, the temple is currently abboted by Master Shi Zhen Guan. Construction work started around 2001 and its basic structure were completed only in 2007. The temple then decided to open for public worship. As the temple has been built in the wooods, it offers an excellent haven for religious retreats.

Other than the Sakyamuni Valuable Palace, the God of Prosperity Temple, Di Zhan Dian Cinerarium Pavilion and the Hall of Spirit Tablets which have been completed within the compound of the Fa Yu Chan Si temple, the remaining buildings such as Buddhist Relics Hall, Cultural Relics Hall and the Bodhidharma Pavilion are under construction.

Even though Fa Yu Chan Si is still undergoing beautification, renovation and further development at this moment, once you step inside the temple, you will be able to find countless of stone statues of Buddha. Other than the nost notable Big Buddha's Head and half-body Buddha statues, the most eye-catching relics are the Buddhist columns and pagoda. These masterfully crafted carvings have created an atmosphere of a thousand-year-old ancient temple.

Besides, rows of intricately carved Buddha statues have been neatly placed on both sides of the pagoda and Buddhist Columns.

The Cultural Relics Hall, meanwhile, looks like a relic site full of inscribed texts, stone statues of Buddha, etc, the most outstanding being the 500 Luo Han statues in different postures, costumes, and names. There are also relics from the Tang, Yuan and Han dynasties.

In an interview with Guang Ming Daily, the temple's admin secretary Ms Chen Yi Ping said there are currently many different kinds of relics in the temple, and the most notable include the Crystal Sarira Pagoda containing the sarira of Buddha and and other Buddhist masters, relief carved with the Heart Sutra, the dragon statue said to be the incarnation of Bu Dong Ming Wang, the thousand-year stone tortoise, the five hundred Luo Han, the statue of Bodhidharma made of thousand-year old Longan wood, Buddhist pagodas, etc.

She also disclosed that there is a special statue of the God of Mercy in the temple. Unfortunately, due to technical problems, the statue is not ready for public viewing.

Age of statues yet to be verified

Chen said many of the stone carvings in the temple have been inscribed with the years of manufacture, including the stone tortoise, which almost a thousand years old. According to findings, it is within the period of the Tang Dynasty and it contains thousands of years of history. However, she said as these relics have not been verified by specialists, the temple is unable to ascertain the authencity of these historical items.

She said since the historical backgrounds of these stone carvings have yet to be verified, she advised the public to view these carvings as works of art.

Devotee from land-scarce Singapore builds temple across the Causeway

"By chance I came to know this collector. Originally I only intended to purchase the statues of Hua Yian Shan Shen (Three Sages), i.e. Buddha, Manjuri Bodhisattra and Pu Virtuous Bodhisattva for display at the Sakyamuni Valuable Palace for the purpose of veneration. I never expected that after knowing about my concept of developing the temple, he kindly contributed his collection to Fa Yu Chan Si."

"To me, these relics are invaluable, and their market value is not important to me because the owner's offering came when we were going through the toughest time building the temple. Nothing can replace his generosity and I truly appreciate his kind contribution."

Master Shi Zhen Guan said that initially he felt that many devoted Buddhists gave up their faith when they got old. So he had a vision to build a this Buddhist enclave to provide a quiet retreat for these people.

"Although the temple has already been given a large number of cultural reliefs, due to insufficient funds, we have problem fulfilling the concept of a Buddhist enclave. However, it will remain the focus of our development in the future."

The Master said he hoped to develop the temple to something similar to the renowned Kek Lok Si temple in Penang. While encouraging Buddhist devotees to study the Doctrine and retreat, he also hoped to open the temple for public viewing so that more people could appreciate the relics of great artistic values.

Founder of Fa Yu Chan Si, 38-year-old Master Shi Zhen Guan became a monk when he was only 19. A Malaysian, he used to do his religious studies at Guan Yin Shan in Bukit Timah, Singapore. He moved back to Johor after he decided to build a Buddhist enclave.

He said, "We faced a lot of problems initially, such as the sudden suspension of work due to insufficient funds. Nevertheless, the public have given us their generous support and assistance so that the temple could eventually be completed."

As for the origins of the thousands of stone and wooden carvings in the temple, the Master said he could not be sure whether the collection included those which were hundred or thousand years old.

"The Singaporean collector who presented the relics to us did not reveal the origins of these carvings. Therefore I cannot confirm the values of these items"