GEORGE TOWN, Penang (Malaysia) -- The 20-storey high pavilion, built to shelter the Goddess of Mercy (Kuan Yin) statue at the Kek Lok Si Temple in Air Itam, Penang may be listed in the Guinness Book of World Records as the tallest in the world. 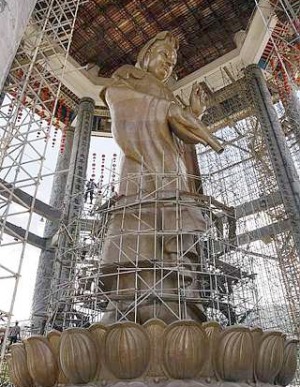 << Tall landmark: The pavilion acts as a canopy for the 30.2m-tall bronze statue of Kuan Yin at the Kek Lok Si Temple in Penang.

Temple abbot Rev Seck Jit Heng said the temple management was planning to get the RM40mil project included in the record book.

“It is rare to see an octagonal pavilion with such a height. This landmark should be recognised in the Guinness Book of World Records,” he said during a press conference at the temple’s office here yesterday.

The 60.9m three-tiered roof pavilion, which is supported by 16 granite pillars, serves as a canopy to shelter the 30.2m-tall bronze statue of Kuan Yin.

Each pillar consists of 40 circular blocks of granite, with a thickness of 45cm and a circumference of 2.1m. The core is filled with reinforced concrete.

Rev Jit Heng said the temple would hold a double celebration on Dec 6.

“We will celebrate not only the grand opening of the pavilion expected to be completed by then but also the 118th anniversary of Penang Kek Lok Si Temple.

“On that day, we will also hold the 20th memorial ceremony for the fourth chief abbot Venerable Bai Sheng who is the founder of the Kuan Yin statue,” he said.

“His Holiness (the great supreme patriach) from Myanmar, Cambodia, Thailand and Sri Lanka are also expected to attend the ceremony,” he said.

The building plan for the entire RM70mil project, consisting of the Kuan Yin statue and the pavilion, was approved in 1999. The statue was completed and unveiled in 2002.