By WINNIE YEOH and PRISCILLA DIELENBERG, The Star, December 7, 2009

Penang, Malaysia -- IT was a sea of brown, grey, yellow and saffron colours during the consecration of the 20-storey high pavilion over the Goddess of Mercy (Kuan Yin) statue at the Kek Lok Si Temple in Air Itam, Penang. 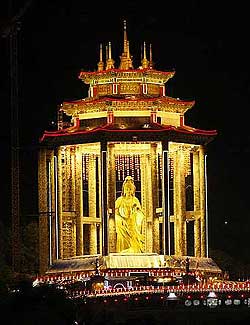 << The pavilion sheltering the Goddess of Mercy which was lit up at night.

The vibrant colours were the robes worn by the 3,000 venerable religious leaders and followers of the Mahayana, Theravada and Vajrayana Buddhist traditions from Malaysia, China, Taiwan, Cambodia, Thailand and Bhutan who were invited to attend the event yesterday.

More than 10,000 tourists and devotees also thronged the temple to be part of the historic consecration and opening of the RM40mil three-tiered 60.9m roof pavilion which is supported by 16 granite pillars.

The four-hour long ceremony started with the singing of the ‘Three Gems’ and the release of multi-coloured balloons.

After that, the Buddhist leaders, their followers and donors were invited to the stage for a ribbon-cutting ceremony followed by the release of 118 peace doves.

Penang Chief Minister Lim Guan Eng said the fourth Chief Abbot, the late Most Venerable Bai Sheng, had initially wanted to build a 120m statue but there was a height limit of 72m imposed by the previous state administration.

“There was also a condition that a sphere-shaped structure be built around the statue but after some discussions, the temple committee decided to replace the earlier agreed upon structure with an octagonal pavilion with bead curtains.

“Even though the contractor was about a year late in completing the pavilion, we’re glad that it’s finally finished,” he said.

Minister in the Prime Minister’s Department Tan Sri Dr Koh Tsu Koon, who was also present at the event, announced a RM1mil Federal Government allocation for the 118-year-old temple.

He said Prime Minister Datuk Seri Najib Tun Razak had asked him to convey his heartfelt congratulations to those from the temple and best wishes to Buddhists in the country.

The former Penang Chief Minister said that he had promised to apply for a federal allocation two years ago but this did not transpire when the state administration changed hands.

Dr Koh said Kek Lok Si had grown into the biggest Mahayana Buddhist temple in South-East Asia, and was a symbol of thriving Buddhism, a tourist destination, and a manifestation of religious freedom within the country. 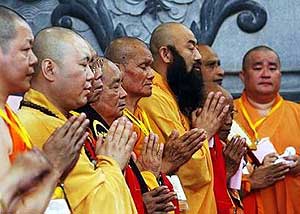 << Monks praying at the opening of the pavilion

Housing and Local Government Minister Datuk Seri Kong Cho Ha, who was among the guests, described the temple as a landmark in Penang and a must-visit tourist spot.

“Its famous statue of Kuan Yin shows the rich culture of the country, and people irrespective of their religion come from all over the world to visit,” he said.

Donors then made offerings of incense, flowers, lights, perfumes, fruits, drinks, food, beads and precious stones to the Goddess of Mercy during a ceremony.

There was also a special chanting session and devotees were then blessed with the sprinkling of holy water by the Mahayana monks in a blessing and cleansing ceremony.

The event was also to commemorate the 20th memorial of Ven. Bai Sheng.

Kek Lok Si Temple was established by the late Most Venerable Miao Lian in 1891 and has become Penang’s most well-known landmark apart from Komtar.

The temple is not only one of the main Buddhist centres of the Mahayana tradition in South-East Asia but it has also become an international tourist attraction.