Light a lamp of hope and relief by Malaysian Buddhists

KUALA LUMPUR, Malaysia – Malaysian Buddhist organizations are coming together in one united act of compassion to raise funds and alleviate the sufferings of Haitian earthquake victims.

More than 40 Buddhist organizations responded with spontaneously to call by The Most Venerable B Sri Saranankara Nayaka Maha Thera, Chief Monk of the Sri Lanka Buddhist Temple and Chief Monk (Judiciary) of Malaysia, to come together and help out in the catastrophe that hit Haiti.

A mass oil lamp offering -- symbolic of lighting up the darkness and transmuting the negativity of untold sufferings into the positive energy of peace, love and harmony – will be a key initiative to raise funds among the Buddhist community.

An all-Buddhist simultaneous chanting of Paritta and meditation session in the various temples / viharas are also being planned on the full moon night of 30 March 2010 for the well being and happiness of the people of Haiti.

These collective efforts will culminate with a concert The Sound of Compassion which will bring together famed Buddhist singing groups like i-gemz, Messengers of Dhamma (MOD), D2Y Choir Group, Choir of Persatuan Penganut Agama Buddha Bodhi and many others at the HGH Convention Centre, Sentul, Kuala Lumpur, on 18 April 2010 at 7.00pm in this major fund-raising event.

Venerable Saranankara said he initiated this “LIGHT A LAMP OF HOPE & RELIEF” as he felt that together, much can be achieved speedily and effectively especially in raising the much needed funds to help bring relief to the devastated & traumatized Haitians.

Haiti, one of the poorest countries in the Americas, is already home to 380,000 orphans and this number has increased exponentially with the January 12 earthquake that killed more than 200,000 people, severely injuring another 300,000 and left more than one million homeless. 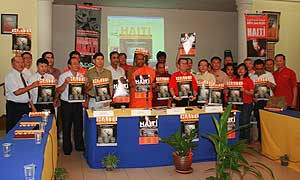 “The suffering is unfathomable. I have heard in the news that a bottle of water and some snacks are just all it takes to make the people happy there,” he added.

Buddhist Compassion Relief Tzu Chi Foundation is at the forefront providing aid and helping to bring relief to the victims. Venerable Saranankara said all the funds raised from the oil lamp offering and the concert will be channeled to Tzu Chi so that it can speedily reach the suffering Haitians.

The Launch of the Malaysian Buddhist “Haiti Relief Fund” will be at the Sri Lanka Buddhist Temple, Jalan Tujuh, Sentul, Kuala Lumpur on the full moon night of ‘Chap Goh Mei’ on Sunday, 28 February 2010 at 8.00pm with the Lighting of Lamps.  Subsequently, on Tuesday, 30 March 2010 at 7.30pm at the same venue and other participating organizing temples a simultaneous chanting of Paritta will be held.

Other venues organizing the Chanting and Meditation sessions and Lighting of Oil Lamps are as follows:

Members of the public are invited to partake in these meaningful programs.
Those interested and for further information on the events can log in to: www.bovis.tv/helphaiti or contact any of the following: