Kuala Lumpur, Malaysia -- Nalanda Institute, Malaysia, a leading Buddhist education institution in Malaysia, is a proud recipient of the World Tipitaka, a gift of wisdom and peace, by the Dhamma Society of Thailand in honour of the late Royal Patron, Her Royal Highness Princess Galyani Vadhana, elder sister of His Majesty King Bhumibol Adulyadej. 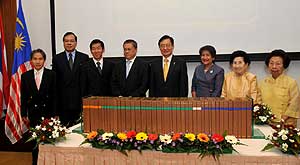 Nalanda Institute was awarded the World Tipitaka as a recognition for its commitment and contribution to integral human development in the country, and is the first and only Malaysian institution to be presented with this revered gift.

“Today marks a historic milestone for Nalanda Institute and the Malaysian Buddhist community.  The gift of the World Tipitaka reaffirms the stability and maturity of our nation amidst social diversity and cultural dynamism, and our readiness to be entrusted with the noble responsibility of preserving and advocating the Buddha’s message of peace and harmony,” said Dr. Tan Ho Soon, the Director of Nalanda Institute, Malaysia.

Since its inaugural presentation in 2005, the limited-edition World Tipitaka has been conferred to leading institutions worldwide as a means to preserve and promote the universal education of world peace and happiness.  It also serves as a gesture of goodwill to foster bilateral relations between Thailand and the recipient country.

The recipient institutions are nominated based on their track records in research, study, and contribution to human development and world peace.  To date, only 20 countries and 40 institutions have been awarded the treasured World Tipitaka including the Constitutional Court of Thailand, the Parliament of Sri Lanka, Maha Bodhi Society of India, Uppsala University of Sweden, the University of Melbourne, Australia, and the University of Oslo, Norway.

The official presentation ceremony of the 40-volume World Tipitaka was held at the Royal Thai Embassy in Kuala Lumpur on 7 May 2010.  The ceremony was witnessed by a congregation of over 100 dignitaries comprising the Chancellor of the World Tipitaka, Thailand, H.E. the Ambassador of Thailand to Malaysia, scholars, educators, diplomats and officials from Malaysia, Thailand, and Singapore.

The World Tipitaka will be available for public viewing at Nalanda Centre in Sri Serdang, from July 2010 onwards. For more information, please call the Nalanda Office at +603.8938.1500 / 1501 or email info@nalanda.org.my.

ABOUT THE WORLD TIPITAKA

The World Tipitaka is a Pali Tipitaka from the Resolution of the Buddhist Era 2500 (1956-1957) Great International Council.  Pali Tipitaka is the Buddha’s teaching in Pali language that has been recorded, recited, and memorized since the time of the Buddha.  It has since been faithfully transmitted and preserved to this day.

The Tipitaka, literally translated as the ‘Three Collections’, consist of the ancient scriptures of the Buddha’s teaching divided into three main divisions, i.e. the Sutta Pitaka (teachings and methods to peace and happiness), Vinaya (higher rules and trainings), and Abhidhamma (scholastic explanation of the science of mind).

A complete set of 40-volume Pali Tipitaka in Roman script was successfully published by the Dhamma Society of Thailand in 2005.  As Roman is a universally accepted script, the world’s peoples will be able to pronounce the sounds of Dhamma more accurately and extensively.  Moreover, the Roman script is widely used in modern ICT (information and communication technologies), thus a Romanized Pali Tipitaka possesses greater potential to be disseminated worldwide.

The late Royal Patron, Her Royal Highness Princess Galyani Vadhana, had graciously supported the publication of Romanized Pali Tipitaka and presented it as a royal gift of Dhamma to leading institutions worldwide since 2005.  The royal gift symbolizes a gift of Wisdom and Peace from the Thai people to the peoples of the world.

Nalanda Institute was established in July 2007, under the patronage of Nalanda Buddhist Society, to provide systematic Buddhist education and to serve as a resource centre to the Buddhist community in Malaysia.  Its primary focus is on Pali and Buddhist Studies, Leadership & Management Training, Annual Buddhist Conferences, Learning Resource Centre and Buddhist Publications.

The Institute offers various courses in Buddhist and Pali Studies leading to Certificate and Diploma levels, as well as short training courses to enhance leadership and management skills for Buddhist volunteers. All courses are freely available to the public in line with the Institute’s charitable objectives.

Besides its Centre in Selangor, the Institute’s courses have also been held in Kedah, Kelantan, Kuala Lumpur, Sabah and Terengganu, in collaboration with local Buddhist organizations.  To date, more than 5,000 participants have benefited from the Institute’s courses and conferences.  For more information, visit www.nalanda.org.my.