PETALING JAYA, Malaysia -- The bungalow, nestled in a secluded spot amidst dense greenery, is supposed to be a temple that was built on public donations. 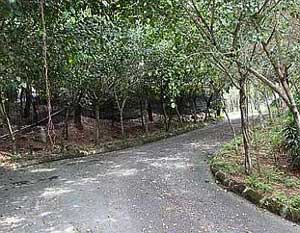 << Shady place: The entrance to the centre in Kajang is cluttered with dead leaves and the entire place is covered in foliage.

But accusations have surfaced that the “meditation centre” in a Kajang neighbourhood has been operating like a country club – open only to its estimated 30 members.

Almost 100 Buddhist devotees have been asking for the re-opening of the temple, built in a sprawling leafy area, since last year.

Their petition is seen on a website which was started last year by several former university students who once volunteered at the place.

According to them, the centre has been closed to the public since October 2006. The priest, who was the founder, quit that year.

The latest posting on the blog was dated May 29. It showed photographs of the centre, taken from outside its gate, where a CCTV was also installed there.

It is believed that several monks are residing in the centre now.

One of them, when contacted, was hesitant to elaborate about its recent Wesak Day celebration.

“We have our own things to do here,” he said, declining to reveal his name.

A volunteer, who once helped to coordinate activities of the centre, spoke of her heartache of what the place had now become.

“We started it from scratch. Devotees helped to collect donations to buy the land for the centre,” she said.

According to the former volunteers, the centre sits on a 1.8ha piece of land which was bought from a developer with 50 guarantors in 2001 at RM2.3mil. This was fully paid up in 2004.

According to the website, the centre has another five plots of land elsewhere. The volunteers had sought the services of a valuer, who estimated that all the assets could be worth about RM10.8mil.

Previous news reports indicated that the centre once had about 100 volunteers and attracted 10,000 devotees to its events.

A Hong Kong resident even donated RM100,000 to the centre according to newspaper reports last year.

In its 2008 annual general meeting, members passed a resolution that they would not be seeking an external auditor to audit their accounts.

The centre, the volunteer said, started in 2001 and the priest in charge had a big following due to his community work.

She alleged that things started to go downhill when the monks began to break into factions among themselves.

“Some of the monks even took away several Buddha statues and equipment like loudspeakers,” she claimed, alleging that they brought in gym equipment instead.

Several devotees have lodged a police report about breach of trust but the monks also countered with a report that they had been harassed.

Calls to several officials of the Malaysian Buddhist Association, of which the centre is a member, showed that they were aware of complaints about the centre.

“We are leaving it to our legal team to look into the problem,” one official said.

The devotees have also complained to the Registrar of Societies.

Asked about the centre, registrar Datuk Md Alias Kalil agreed that any place of worship should be open to the public although “in this case, the by-laws of the centre stipulate that it is opened to those deemed as members.”

It is learnt that the ROS will soon be issuing the centre a show-cause letter, seeking an explanation why two laymen were on its committee although its constitution stated that only monks could hold posts.