Klang, Malaysia -- A GROUP of Buddhist residents staying in Bukit Tinggi, Klang, organised a gathering last weekend to appeal to the state government to grant a piece of land in Bukit Tinggi to erect a Buddhist temple. 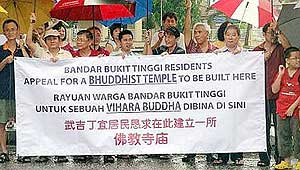 << Need for place of worship: The group of Buddhist residents staying in Bukit Tinggi, Klang, highlighting their appeal.

Spokesman Dr Robert Lim said the group, through the Mudita Buddhist Society in Klang, has been applying for a piece of land since April 2009 to build a Buddhist temple.

“The society first sent its application to the Selangor Menteri Besar, and subsequently followed up with state executive councillors Dr Xavier Jayakumar and Ronnie Liu,” he said.

“We were informed that there are seven groups applying for a piece of land in Bukit Tinggi to build a place of worship. Ours is the only Buddhist group as the rest are Taoists.”

The group found out last month that one particular piece of land, measuring a little over 2,601.29 sq m that had been allocated for non-Muslim place of worship, would be given to four Taoist organisations to be divided among them.

“If this is true, the Buddhist community in Bukit Tinggi is appealing that, for equity’s sake, instead of the whole piece of land being given to Taoist organisations, half be given to Buddhists for us to erect a Buddhist temple,” said Dr Lim.

“We have been informed that the announcement to give the land to the four Taoist organisations has yet to be confirmed.”

Meanwhile, the Buddhist community has collected some 1,000 signatures in support of its intention to build a Buddhist temple to be built in the Bukit Tinggi vicinity.

“There are more than 1,500 Buddhists in Bukit Tinggi, and the number of devotees is still growing.

“At present, we have to go to the temples in Brickfields or Shah Alam because there are no Buddhist temples nearby,” added Dr Lim.