Over 3,000 turn up at memorial service by Buddhist group

Singapore -- Buddhists from all over Singapore met to remember Mr Lee Kuan Yew yesterday at a memorial service organised by the Singapore Buddhist Federation (SBF). 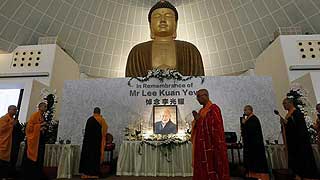 << A memorial service for Mr Lee was held at Kong Meng San Phor Kark See Monastery yesterday. Organised by the Singapore Buddhist Federation, it was the first in a series of religious events to mark the former Prime Minister's passing. More than 3000 members of the public as well as monks attended the service. -- ST PHOTO: CHEW SENG KIM

The service at Kong Meng San Phor Kark See Monastery drew more than 3,000 members of the public as well as monks. It was also the first in a series of religious events to mark Mr Lee's passing.

The congregation at the temple in Sin Ming Avenue observed a minute of silence, before bowing three times in respect for Mr Lee.

Devotees then recited, for an hour, The Vows and Practices of Samantabhadra Bodhisattva, a chapter of Avatamsaka Sutra, which reiterates how the existence of each individual becomes more meaningful through connections with other people.

SBF's president, Venerable Seck Kwang Phing, said Mr Lee "respected all religions". "He interacted very closely with leaders of all the religious groups in Singapore, resulting in the harmonious society that we have today."

The guest of honour, Senior Minister of State Josephine Teo, said: "Day and night, Mr Lee's main priority wasn't his own matters. It was how our nation would continue to be prosperous, and whether people would have good lives."

Mrs Teo, who is MP for the Bishan-Toa Payoh GRC, also recounted how she had been given the chance to go with Mr Lee on his trips and witness how he interacted with foreign leaders.

"He helped Singapore establish a foothold on the world stage, to ensure that whenever we would bring out our red passport, we were not looked down upon."