Singapore -- Ever since he was in primary school, Goh Chun Kiang has wanted to be a monk. 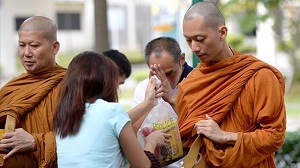 << Venerable Goh Chun Kiang collecting cooked food from people at a food centre. The food is then distributed as lunch to the monks and lay people at Palelai Buddhist Temple. -- ST PHOTO: JAMIE KOH

While in Bukit View Primary School, he came across some simple booklets on Buddhism on his father's bookshelves.

Venerable Goh, 29, who donned monastic robes six years ago, says: "I found the Buddha's intention to end human mental suffering very noble and I wanted to be like him."

When he told his mother, a housewife then, about his intention, she was dismayed. She practises ancestor worship and goes to Chinese temples to pray for health and peace. Ven Goh recalls: "She got all the relatives to come the next day to try to dissuade me."

From then on, he kept his aspiration a secret. Although his family's finances went through some rough times - his father's trading business went bust in the 1998 economic crisis - Ven Goh says his growing-up years were generally happy.

He continued to read books about Buddhism through his secondary school days at Assumption English School. He still thought about becoming a monk, but his aspiration dimmed somewhat with "materialistic happiness".

He says: "I was the top student in class. I also had a group of friends and we would often go to play arcade games after school to enjoy ourselves. Life was good."

It took his parents' divorce when he was in Secondary 4 to shake him out of his "complacency". Worried about what would happen to him and his brother, who was eight years younger, he could not concentrate on his studies and instead of the expected As, got Bs and Cs for his O Levels.

He says: "I became disenchanted with secular life. I saw that not everything would go according to our will or expectations."

Together with his father, who won custody of the children, he became a Buddhist. He also resolved anew to take up the monastic path, believing that he could make faster progress spiritually than if he were to remain a lay Buddhist.

When he told his parents about his intention, they were more receptive this time. Having gone through a divorce, they saw no point in forcing their child to get married.

He signed up for a meditation course and went for his first meditation retreat.

After he completed his studies in chemical process technology from Singapore Polytechnic, he entered national service. All this time, his resolve to become a monk never wavered.

He says: "I was just waiting to complete NS because one needs to be free of government debt to get ordained."

Meanwhile, to condition himself to the life of a monk, he went for Buddhist meditation retreats at least once a year.

A few months after his national service, he was ordained in the Theravada tradition at Santi Forest Monastery in Johor in a ceremony attended by his parents and brother. He was 23 years old.

He spent the next four years away from city life, first staying at the forest monastery in Johor and then at various forest monasteries in Thailand. There was flooding during the rainy seasons and during winter, he had to put on more robes.

He says: "My teacher wanted me to realise that inner peace comes from within and is not dependent on external factors."

At the end of 2012, he returned to Singapore and is now a resident monk at Palelai Buddhist Temple in Bedok Walk. Among other things, he is in charge of the accommodation for visiting monks.

Life after ordination has its "ups and downs". He says: "You still have to deal with people's politics. There are quarrels and disputes. But this is a human problem which existed even in Buddha's time.

"Our practice is to just be mindful of anything that comes, tell ourselves that it's impermanent, and let it go."

As a monk, he has to adhere to 227 precepts including remaining celibate. It has not been too difficult, he says, as he has been practising most of them even before he got ordained.

He says of his training as a monk: "We were asked to meditate and contemplate on the foulness of the human body to help us reduce our attachment to it."

Says Madam Lee of her son: "I wanted him to go to university and get a job after that. But when I saw how much he wanted to do this, I had to let him go. And now that I see he's happy, I am happy for him too and wish him well."